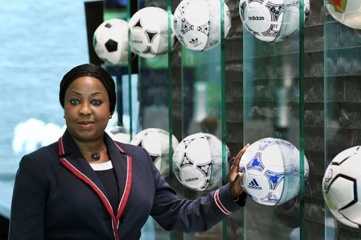 Fatma Samoura, the recently appointed Secretary General of FIFA, is to speak at Soccerex Global Convention

FIFA have confirmed that new Secretary General, Fatma Samoura, will deliver an exclusive keynote address as part of the opening of this year’s Soccerex Global Convention (26 – 28 September, Manchester) to update the football industry on the future plans of FIFA. She will be staying on to present the inaugural FIFA Diversity Awards which will take place at the end of the first day of the Convention.
Her appearance at Soccerex will give the football industry a rare opportunity to hear from one of the new leaders at FIFA and now, one of the highest profile female administrators in global sport.
Ms Samoura, who was appointed to the post at the FIFA Congress in May, is the first female Secretary General in the organisation’s 112 year history. She is a 21-year veteran of United Nations programmes and was, in her last position, the UN’s Resident/Humanitarian Coordinator and UNDP Resident Representative in Nigeria. Commenting at the time FIFA President Gianni Infantino said:
“Fatma is a woman with international experience and vision who has worked on some of the most challenging issues of our time. She has a proven ability to build and lead teams, and improve the way organisations perform. Importantly for FIFA, she also understands that transparency and accountability are at the heart of any well-run and responsible organisation.”
Commenting on her upcoming Soccerex appearance, Ms Samoura said: “I am very excited to attend Soccerex – it is a great platform for football stakeholders and I am looking forward to speaking with delegates about my thoughts and vision for our game and the work we have started at FIFA to ensure football enters a new era of greater transparency and good governance. I am also very excited to present on the occasion of the convention the first FIFA Diversity Award, which will recognise an outstanding organisation, group initiative or personality that is standing up for diversity and anti-discrimination in football.”
Soccerex CEO, Duncan Revie commented: “It is a huge honour to welcome Fatma to this year’s Convention – given her impressive background and her role at FIFA, she is someone our delegates will be fascinated to hear from and her address will undoubtedly be one of the highlights of the event.”
Ms Samoura’s address and the FIFA Diversity Awards are just part of a high level conference agenda at the Global Convention that will feature senior representatives from organisations such as NFL, LaLiga, Facebook, Vauxhall, The Chinese Football Association, Fox Sports, Leicester City and Atletico Madrid tackling a wide range of subjects spanning everything from social media and sponsorship, to stadia technology and how virtual reality is changing football. For more information on the conference programme please go to www.soccerex.com/global.
The three day football business event, which is supported by LaLiga, The English Football League and Serie A, will also feature a market leading international exhibition and a programme of structured and informal networking events.
For more information on Soccerex please visit www.soccerex.com, call +44 (0)20 8987 5522 or email us at enquiry@soccerex.com.