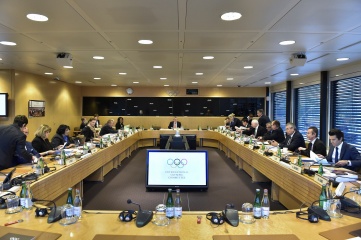 The Executive Board of the International Olympic Committee (IOC) on Thursday adopted a declaration on good governance in sport in response to growing concerns of sports organisations.

In the declaration, the IOC singled out criminal investigations into FIFA as an area of particular concern that “could affect all sport organisations” for up to five years.

In a statement, the IOC said the Executive Board welcomed the FIFA Executive Committee’s proposals for major reforms, which include term limits.

However, the IOC said its Executive Board “remains concerned with regard to the ongoing criminal procedures in the United States and Switzerland, which according to these authorities could last for another five years.

“Since this could continue to overshadow the credibility of FIFA and affect all sport organisations for such a long time, the IOC EB encourages FIFA to take all necessary measures to clarify and resolve all the pending issues as soon as possible by further engaging with the relevant authorities.”

The IOC declaration proposes a number of measures to develop good governance in sport. “Recent incidents have shown that, in the interest of the credibility of all sports organisations immediate action to reinforce good governance is necessary,” the IOC statetment said.

According to the declaration, the basic principles of good governance, including transparent and democratic decision making processes, financial reporting and auditing according to international standards, publication of financial reports and ethics and compliance rules, etc. will be applied during 2016.

The IOC will initiate an independent audit system of its major subventions to IFs, NOCs and Organising Committees for the Olympic Games (OCOGs) with regard to the financial as well as the good governance aspects. With regard to all other activities of IFs, NOCs and OCOGs, Recommendation 27 of Olympic Agenda 2020 should be applied as from 2016. The IOC, recognising the independence and autonomy of the IFs, appreciates their support for this initiative as expressed in the IOC EB meeting and by setting up a working group on sports governance by the Association of Summer Olympic International Federations (ASOIF).

The IOC has also has asked the International Institute for Management Development (IMD) in Lausanne and its Global Board Centre to undertake research into good governance at the IOC itself. A first assessment by IMD was presented to the Executive Board.

The IOC Executive Board also confirmed its zero tolerance policy toward doping, expressing support for the authority and autonomy of WADA while putting forward a number of proposals to the WADA working group.

These include establishing an independent testing and results management entity, under the leadership of WADA. “Sports organisations should transfer their doping control operations to this new organisation and make the funding available initially at the level of the present investment in the fight against doping. This organisation should also co-ordinate the work of the national anti-doping agencies to ensure a streamlined, efficient and worldwide harmonised anti-doping system. Governments, which are 50 per cent partners of WADA, should support this reform alongside the sports movement, both logistically and financially,” the IOC said.

This entity should include a “professional intelligence gathering unit” to “address issues that may affect the compliance of anti-doping organisations and anti-doping laboratories accredited by WADA, at the earliest possible stage. This would help to make all such institutions compliant at all times and in such a way as to protect the clean athletes worldwide to the same level.”

The IOC declaration also determined that sanctions should be pronounced by the Court of Arbitration for Sport (CAS) in a centralised way, which would make the system cost-efficient and lead to harmonisation among all sports and all countries. The current right to appeal such sanctions to a different chamber of the CAS would be fully upheld and guaranteed, the IOC said.

The IOC is aiming to have an independent anti-doping system in place from the 2018 Winter Olympic Games in Pyeongchang.