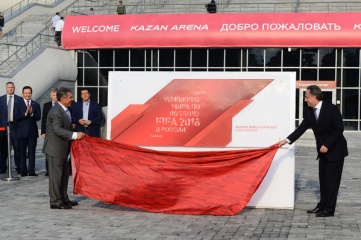 FIFA has urged Russia to drop two of the planned host cities for the 2018 World Cup to meet with their preferred allocation of ten stadiums across nine cities.

FIFA President Sepp Blatter recently visited Russia and met with President Vladimir Putin as well as Vitaly Mutko and Alexet Sorokin, the Chairman and the CEO of the 2018 FIFA World Cup Local Organising Committee respectively, to discuss the plans.

The Interfax news agency quoted Mutko as saying: “The existing conception of the 2018 World Cup provides the staging of the event at 12 stadiums in 11 cities. FIFA recommended staging the World Cup at 10 venues in nine cities.”

“We will once again tour the 11 cities, and then a decision will most likely be made. Everything will depend on how things move along and how the cities view the post-tournament program.”

“We’ll finalise our decision taking into consideration the progress of the host cities in their World Cup preparations.”

Blatter first revealed the reduction plans at the final press conference of the 2014 Brazil World Cup in July. He said: “We are not going to be in a situation, as is the case of one, two or even three stadiums in South Africa, where it is a problem of what you do with these stadiums.”

Issues with stadium construction and underdeveloped infrastructure have also been cited as the reasoning behind FIFA’s demands, with several sites facing huge delays. Russian daily newspaper Kommersant recently suggested the cities of Volgograd, Kaliningrad and Yekaterinburg were the most likely to be excluded from the World Cup.

However, other cities also face uncertainty. The construction of the 45,000 seated Rostov-on-Don Stadium is still yet to commence whilst in Saint Petersburg, the $1.1 billion New Zenit Stadium has faced massive delays. Construction work on the new home of Zenit Saint Petersburg began in 2006 but by 2012 was only half built and facing a complete redesign of the stands. The stadium may now not open until 2017, nine years past the original deadline.

On the other hand, some Russian cities have fared much better with their World Cup developments. For example, the new Kazan Arena recently hosted its first football match after being completed in record breaking time last year.