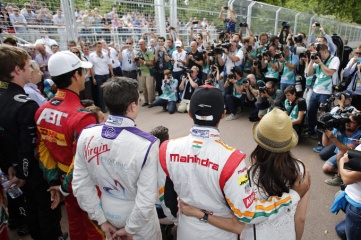 Eurosport has secured the broadcasting rights to Formula E in Germany, adding to its deals with seven other EU countries, while the UK rights have been awarded to ITV for the second season.

Eurosport now holds the exclusive TV and digital rights to the FIA Formula E Championship for the next two seasons in Germany, Poland, Sweden, Norway, Denmark and Finland, as well as Iceland on a non-exclusive basis.

“Following the success of the inaugural season we want to ensure audiences can continue to watch and engage with the series,” said Ali Russell, Director of Media and Strategic Partnerships.

“This latest agreement reinforces our outreach across key target markets in Europe alongside other existing deals.”

Under the deal, all 11 rounds of the 2015-2016 FIA Formula E Championship will be televised live and free-to-air on Eurosport in Germany.

“Securing the rights to Formula E further bolsters the channel’s portfolio with a unique brand of racing. It supports our strategy to bring must-have content to local viewers whilst reaching a wider audience.”

In the UK, Formula E has extended its live and free-to-air broadcast deal with ITV.

"We are delighted to renew our Formula E deal for next year,” said Niall Sloane, Director of Sport at ITV.

“The sport is building significantly on a thrilling first year and we look forward to bringing this fresh, innovative and futuristic series to our viewers on ITV and ITV4."

The second Formula E season kicks off in Beijing on 24 October.