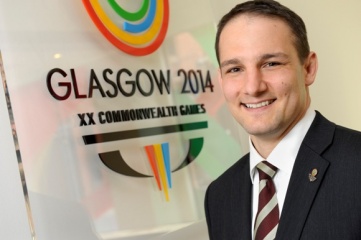 David Grevemberg has been selected to drive the Commonwealth Games Federation forwards, fulfilling statements of ambition made to HOST CITY magazine earlier this year

The Commonwealth Games Federation (CGF) has appointed David Grevemberg, the chief executive of the Glasgow 2014 organising committee, as its chief executive.

Grevemberg will take up the new position in November. Commenting on his appointment in a statement from the CGF, Grevemberg said: “It will be an honour and privilege to lead the Commonwealth sports movement on the next stage of its journey.

“This is a time of tremendous opportunity for the Commonwealth in which sport has an impactful role to play in empowering, inspiring and connecting nations and people in shared purpose.”

Grevemberg appointment was foreshadowed by exclusive comments he made in the cover story of the spring issue of HOST CITY magazine. “One of the biggest challenges is to continue to make sure that the Games represent quality, quantity and universality,” he told HOST CITY in April, when asked about the future of the Games.

“As the Commonwealth Games Federation moves forwards and future hosts come down, it’s about really making sure that the Games can manage all of that and perpetuate itself further by ensuring that it is continually relevant. That will be essential for its success.”

In addition to his experience of delivering the 2014 Commonwealth Games, the 41-year old Grevemberg has worked for a major event owner, as executive director of sport and international federation relations at the International Paralympic Committee.

“I’ve spent a very long and rewarding time in the Paralympic sport movement,” Grevemberg told HOST CITY in April, when asked about his future plans. “And now to be on the other side of the fence in such a leadership role is really an honour and a privilege.

“My main focus right now is to deliver a fantastic Games. I have enjoyed the opportunity to deliver on ambition, particularly at a very anxious time in the world – to be part of something that is so ambitious and so positive.

“I’ve learned quite a lot that’s going to really benefit me moving forward… it’s really given me a sense of what is possible when you get all the plans to align, in terms of the private, public and third sector. While we are all playing different instruments, the symphony sounds beautiful. It’s not just about alignment; it’s really about attunement.

“We are a force for social, cultural, environmental and economic impact, from a local to a global level. All those things play into a broader agenda, which is where I think the world of sport is heading.”

The appointment, which will not surprise HOST CITY readers, was confirmed on June 5th. The president of the Commonwealth Games Federation, HRH Prince Imran, said: “I am absolutely delighted to have a sports leader of David’s calibre join us at this important time for the Commonwealth sports movement.

“He has an excellent track record for delivery and shows a real ambition for harnessing the power of sport within the Commonwealth. We look forward very much to the energy, vision and commitment he will bring to the Federation.”

In the statement from the CGF, Grevemberg added. “I look forward to working with HRH Prince Imran, the Executive Board and the whole Commonwealth Games family – in particular Samoa and Gold Coast, hosts of the next Commonwealth Youth Games and Commonwealth Games.

“I’d also like to pay tribute to Mike Hooper for the commitment he has shown to Commonwealth sport over the past 14 years as the CGF’s Chief Executive.”