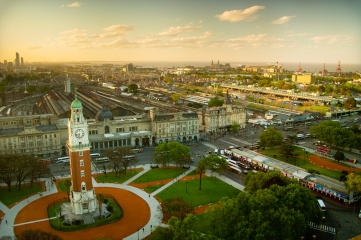 The IOC has praised Buenos Aires' preparations for the Youth Olympics

The International Olympic Committee (IOC) has praised Buenos Aires’ preparations for the 2018 Youth Olympic Games, stating that the Argentinian city has already made “impressive headway”.

The first visit of the IOC Coordination Commission - headed by four-time Olympian and IOC member Frank Fredericks - concluded on Sunday with the local organising committee (BAYOGOC) presenting its plans to bring sport to the inner city, in particular the 2.6 million young people residing in Buenos Aires.

Fredericks said: “Under the expert guidance of CEO Leandro Larrosa, the organisers have really understood the true spirit of the Youth Olympic Games – to put young people at its heart. Thanks to the close cooperation Buenos Aires 2018 has with the all levels of government and the Argentinian Olympic Committee (AOC), the organisation has made impressive headway with strong foundation plans already underway. With its world-famous passion for sport and culture, we truly believe that Buenos Aires will deliver a phenomenal Youth Olympic Games.”

The IOC said “significant progress” has been made on the venue masterplan with a proposed four-cluster concept grouping the sports in a compact framework. In a bid to reflect the culture and spirit of the city, Buenos Aires 2018 has put forward a festival-style concept to feature in each cluster.

Taking inspiration from the ‘Sports Lab’ inaugurated at this year’s edition of the Games in the Chinese city of Nanjing, these festivals will not only showcase and offer sporting experiences to the visitors, but will also provide family entertainment and cultural activities.

Three major development projects will get underway in 2015 including tenders out for the athletics and aquatic venues and the construction of the Youth Olympic Village (YOV) which will begin early next year.

The YOV will be situated in the south of the city, an area of Buenos Aires targeted by the local government in need of urban development. From the YOV, 65 per cent of the athletes will be able to walk to their competition venues. In addition, with the recent launch of the city’s metro-bus link, the IOC said that “excellent” transport links are already in place.

The IOC also said Buenos Aires 2018 has already made “fast progress” by not only discussing the project with the national federations, but using their time in Nanjing this summer to meet with almost all of the international federations to present their preliminary proposals for sport competitions.

Larrosa added: “This is a life-changing project, not only for young athletes, but for future generations in Argentina and we are happy in the knowledge that the IOC Coordination Commission will be by our side to guide us throughout this exciting process. There is a great social legacy we want to achieve with this Games, we want to get all our kids into sport and inspire kids around the world to do the same.”

Buenos Aires was awarded the 2018 Youth Olympic Games in July 2013. The city beat Colombian city Medellin by 49 to 39 in the second round of voting by IOC members. In the first round, Scottish city Glasgow was eliminated after getting only 13 votes, compared to 40 for Buenos Aires and 32 for Medellin.