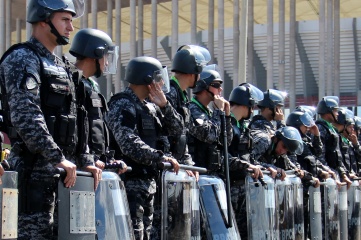 The army takes over the north-eastern city of Salvador, while essential police workers in Rio threaten to strike during the World Cup

In a major blow to the organisers of the World Cup, police strikes have led to Salvador being run by armed forces. Meanwhile in Rio de Janeiro, federal police officers have threatened to strike during the World Cup.

The Brazilian government sent 5,000 troops to of Salvador on Wednesday after the world cup host city was hit by police strikes and civil unrest. According to the Defence ministry, the military operation was authorised by President Dilma Rousseff based on a request from the Jaques Wagner, governor of the state of Bahia.

And on Sunday, a group of 300 people including federal police officers marched through Rio’s Avenida Atlântica carrying white elephants. “We have the same proposal colleagues of Brasilia and other states: Stopping during the World Cup," said André Vaz de Mello, president of the federal police’s union.

The workers include forensics professionals, crucial for security control at airports. Such strike action could paralyse the World Cup.

"The federal government will not agree with any kind of violence and we will not let the World Cup be contaminated," she told a meeting of the council for economic and social development in Brasilia on Wednesday. “The armed forces will participate, we will use the Federal Police and the Federal Highway Police and we have partnerships with all state governors."

Meanwhile, construction workers continue to strike on Rio’s Olympic Park. The widespread strike action coincides with a period of intense scrutiny on the progress of these hugely important mega events.