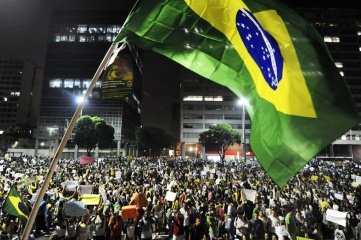 A secret report by the Brazilian government specifies security risks in half of Brazil’s 12 host cities.

The concerns outlined in the report, which is based on consultation with members of the public and was leaked to O Globo, include the risk of strikes and protest.

Rio de Janeiro suffers from “a difficult relationship between public authorities and society”, the report says. And in Sao Paulo, a “potential problem” identified is a $25m budget cut for the military police.

The government is also concerned that civil servants could strike in Belo Horizonte, which might “fuel protests”.  In the northeast, unrest between farm workers and indigenous groups is mentioned as another area of concern.

The report also says “opposition parties are attempting to wreck the image” of the Governor of Brasilia, Agnelo Queiroz. Concerns are also raised over the safety of teams and visitors, according to O Globo.

President Dilma Rousseff’s office described the report as preliminary and inconclusive, saying that the information published in O Globo was neither official nor verified.

Brazil’s sports minister Aldo Rebelo has also played down such concerns. "The possibility of protest during the World Cup is very limited,” he told The Guardian on Monday.

“People are more interested in celebrating the World Cup. Peaceful protests are protected by the constitution. Violent protests are forbidden by law and they are matters for the police to deal with."

Nonetheless, Brazilian authorities will be keen to pre-empt and avoid any potential for further civil unrest, in the wake of the striking and protesting that took place in several cities during last year’s Confederations Cup.

Security concerns are also highlighted by the announcement earlier this week that Brazil is to establish “no fly zones” of a 7km radius over each stadium on World Cup match days, despite major disruption to travel.