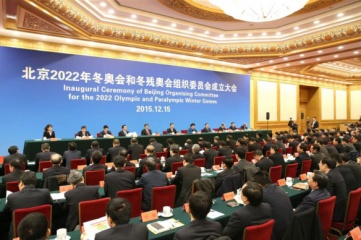 The new Beijing 2022 organising committee was inaugurated on 15th December

The organising committee for the 2022 Winter Olympic Games has been established five months after the election of Beijing as host city, with Guo Jinlong confirmed as president of the newly formed body.

During the 2008 Olympic Games, Guo was mayor of Beijing and executive chairman of the organising committee.

Guo said the first duty would be to review Beijing's host city contract in light of the IOC's Olympic Agenda 2020.

"We will pore over the HCC and the Olympic Agenda 2020, and review our bid commitments before we work out the roadmap and timetable," Guo was reported as saying by Xinhua News Agency.

"We shall ensure every task is accomplished.”

The organising committee, created by the city and the National Olympic Committee, will be responsible for ensuring the Games are organised successfully. Its establishment follows an Orientation Seminar that was held in early November in Beijing.

“On behalf of the International Olympic Committee, it is my great pleasure to congratulate everyone on the inauguration of the Organising Committee for the Olympic Winter Games Beijing 2022,” he said.

“Allow me to congratulate Mr Guo Jinlong, the President of the Organising Committee.

“Beijing is making history as the first city in the world to host both the Olympic Summer Games and the Olympic Winter Games.”

Reducing the cost and increasing the sustainability of hosting the Games is a key aim of Agenda 2020.

Using infrastructure from the 2008 Olympic Games will help Beijing to keep costs down, with a projected budget of US$1.5bn.

“The formation of the Organising Committee represents the start of an exciting journey for the entire Olympic family,” said Bach.

“This milestone is the first step on our six-year journey together to deliver brilliant Olympic Winter Games in 2022 for Beijing, for China, and for the world.”

Beijing was selected as host of the 2022 ahead of Almaty, the only other city that progressed to the candidature stage.

The host faces challenges in managing air pollution in the city and ensuring there is enough snow in the mountain resort of  Zhangjiakou.

According to Xinhua, Chinese President Xi Jinping has asked the organizers to "work harder to host a fantastic, extraordinary and excellent Games”, saying city management, environmental protection, budgetary control and the appeal of winter sports in China will all need to be heightened.