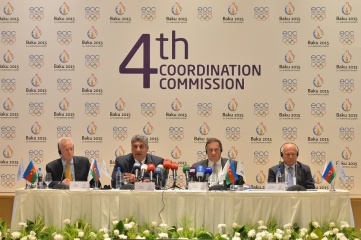 The European Olympic Committees Coordination Commission has hailed the Baku 2015 European Games Operations Committee’s (BEGOC) preparations for the inaugural edition of the multi-sport event, which will take place in Azerbaijan’s capital city next year.

Members of the Commission recently completed a visit to the country to check on progress ahead of the event. In addition to touring competition venues, the visiting party also observed presentations from a number of BEGOC representatives.

“There is a fantastic team here in Baku and this visit has given us an opportunity to meet many of the new members of staff who are all working hard to make the inaugural European Games a world-class event,” Commission chairman Spyros Capralos said.

“Significant work has been achieved over the past year and a half and the continued efforts to innovate, particularly with regards the sports programme, is very impressive.”

The programme for the Games has been wrapped up, with the martial art of sambo being added to complete the 20-sport schedule.

Capralos added: “The European Games will make history for European sport and it is vital that BEGOC continues its excellent progress in preparing for Europe’s first continental multi-sport Games.”

During the visit, BEGOC chief executive Azad Rahimov, who is also Azerbaijan’s Minister of Youth and Sports, officially opened the new Baku 2015 headquarters.

“We can sense the growing levels of excitement and anticipation here in Baku,” he said. “We are confident that each and every venue at next year’s Games will host enthusiastic fans enjoying the experience of elite European sport.”

In June, the European Olympic Committees’ president, Patrick Hickey, described the “scale and pace of development” in Baku as “remarkable”.

The European Olympic Committees Coordination Commission will make its final visit to Baku to check on preparations in February 2015.