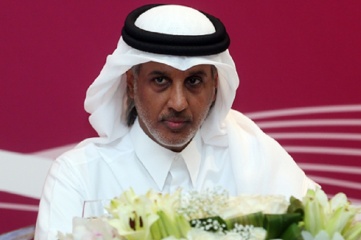 Qatar was drawn with Iran, UAE and Bahrain in Group C, while hosts Australia face South Korea, Oman and Kuwait in Group A.

China was drawn with North Korea, Saudia Arabia and Uzbekistan in Group B. Group D is comprised of Japan, Jordan, Iraq and the AFC Challenge Cup 2014 winners.

On the eve of the draw, Sheikh Hamad confirmed his attendance at the Soccerex Asian Forum.

Soccerex CEO Duncan Revie said: “It’s a great honour to welcome Sheikh Hamad to the Asian Forum, with Qatar being an example of the rapid growth of football within Asia; we’re delighted to be able to offer our delegates the opportunity to network and do business with one of the most influential footballing administrators on the planet.”

Re-elected to another four-year term late last year, Sheikh Hamad was at the helm of the association when the country won the right to host the 2022 FIFA World Cup.

One of the central figures behind the development of the commercial aspect of the game in Asia, Sheikh Hamad oversaw a number of major sponsorship deals for the association as well as the Q-League, including agreements with Qatar Airways, QNB Group and Aamal.

Soccerex Asian Forum, organized in partnership with the Asian Football Development Project (AFDP), takes place on 13-14 May at the King Hussein Bin Talal Convention Centre, situated on the banks of The Dead Sea, Jordan.

For more information about AFC Asia Cup visit the www.afcasiancup.com

For further details about the Soccerex Asian Forum please contact Soccerex on +44 208 987 5522 or visit www.soccerex.com