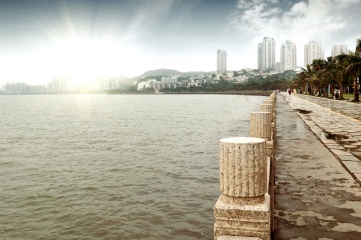 The WTA is introducing a new season-ending event in Zhuhai

The Women’s Tennis Association (WTA) has agreed a long-term deal with the Chinese city of Zhuhai to establish a new end-of-season event that will replace the existing Tournament of Champions.

The 12-player singles field in Zhuhai will consist of players ranked No.9 through No.20 in the world, along with one wildcard, in a four-group round robin format. The winners of each respective group will advance to the single elimination semi-final stage of the event.

Six doubles teams will compete in a two-group round robin format, with the winner of each group advancing to the final.

The Elite Trophy will take place at the custom-designed, state-of-the-art tennis centre in Zhuhai, and will be played the week after the WTA Finals, which see the sport’s top-ranking stars compete in Singapore.

“This brand new event combining great players, a fantastic new stadium and the magnificent location of Zhuhai is a formula that will make the WTA Elite Trophy a success,” WTA chairman and chief executive Stacey Allaster said. “Thanks to the commitment and vision of the Zhuhai government, Huafa Group and Ace Pro Group - APG, the fan experience will be exciting and inspirational, and we will showcase women's tennis and this beautiful city to a global audience through broadcast, digital and social media.”

Zhuhai’s Vice-Mayor Lydia Long added: “We are deeply grateful for WTA's trust and support in making Zhuhai's dream of joining the WTA family a reality. The people of Zhuhai will warmly welcome the best women tennis players and tourists from around the world to this beautiful, romantic and dynamic city.”

The addition of the Elite Trophy in Zhuhai aligns with the WTA’s strategic growth and development within the Asia-Pacific region. In 2014, 17 WTA tournaments took place in the region.

The existing Tournament of Champions has been staged in the Bulgarian capital Sofia since 2012, but this year’s edition is set to be its last.