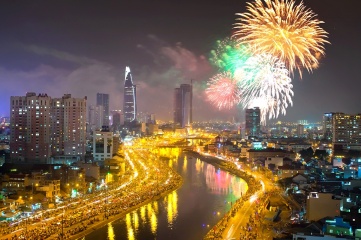 The World Fireworks Championship has launched the process of identifying a host city for the event for 2015 and beyond, making it one of the world’s biggest artistic events that moves from one city to another.

“We are incredibly excited about the opportunity that the World Fireworks Championship has to offer a host city, as one of only a few major arts events that move from city to city around the world delivering very significant economic returns,” said Angus Buchanan, joint managing director of The Sports Consultancy.

The Sports Consultancy has partnered with event producer, World Fireworks Productions with the aim of making the championships into “one of the world’s great travelling arts events”.

The process of identifying a host city for the event from 2015 onwards begins today.

“We are realistically looking for a 2015 host who will then host the next two editions before it rotates annually,” said Lucy Caillé, senior consultant at the Sports Consultancy told HOST CITY.

An interactive ‘Art of Light Festival’ will run alongside the championships with the aim of creating a busy programme of family orientated exhibitions and installations.

The event has also just announced its first commercial partner, global travel provider, TUI Event Group, who will will create and market bespoke travel packages to the host destination.

“The event blends fireworks' universal appeal with the ability to showcase the city in, literally, the best possible light.  We’re really delighted to work with the team to develop the event as a “once in a lifetime” experience.”

The 2010 World Fireworks Championships in Oman attracted an audience of over 750,000 making it the largest ever spectator event in the Sultanate’s history and was won by Lacroix-Ruggieri representing France.

“Our plans for the future promise to take the Championship to new heights and we’re really looking forward to finding a host partner to share in our development of the World Fireworks Championship to make it one of the world’s greatest festivals.”

Potential host cities have been invited to submit an expression of interest by contacting the organisers at hosting@worldfireworkschampionship.com