Home
»
News
»
What will London bid for next? 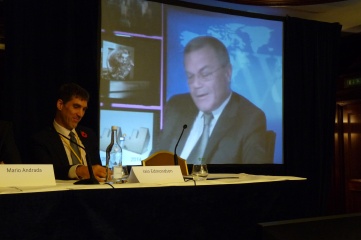 How do you follow the greatest show on earth? Iain Edmondson, head of major events at London & Partners and speaker at HOST CITY Bid to Win, talks us through his city’s plans

HOST CITY: Having hosted the biggest and best event in the world in 2012, what type and scale of events is London aiming to host over the next 10 years?

Iain Edmondson: We have secured a calendar of championships for Olympic sports, such as European Hockey 2015, World Track Cycling 2016 and the World Athletics 2017 in the permanent Olympic venues.

And there’s the Rugby World Cup next year, which takes place in existing venues and the new assets we have, including the Olympic stadium. Complementing that are events where London provides the opportunity to globalise, like the NFL.

What was once termed a decade of sport has now been rounded off with the announcement that the 2020 European football championships will be finishing here, with the semi-finals and finals.

What we are doing now is to see how we can bring our reputation from sport and major events into the cultural content that we have. People visit London largely because it is a diverse city with great attractions in a number of different ways – not just museums and galleries but the performing arts that appeal to people throughout the year.

You see some great examples of light festivals in cities around the world in the winter. The idea of a London Light Festival is something that we are looking at seriously.

HOST CITY: How seriously are you considering a bid for the 2025 World Expo?

Iain Edmondson: Very seriously. Our experience of delivering major international events over the past decade means we now have the capability to evaluate the practicalities as well as potential benefits of hosting the biggest and the best, like a World Expo.

Ten years or so ago we wouldn’t have had the same degree of understanding and intelligence to look at its potential to deliver our strategy and aims for London. We are better placed to consider whether or not the World Expo is right for the city and whether we want to enter the race.

If you are going to host something of that scale you need certain infrastructure, so we have looked into that as well. We are looking at the assets in the city that we have now, like Queen Elizabeth Olympic Park, what the situation might be for London in ten years’ time and how this might align with an Expo.

The good thing is that the Mayor understands the power of major events and wants to hear recommendations as to whether we should bid or not.

HOST CITY: What do you think the owners of major events are most looking for in a host city?

Iain Edmondson: There are basic factors that you’ve got to be able to demonstrate, such as transport and security, but one the biggest is the ability to reach an audience. Rights holders are interested in the markets where the events are hosted. If you’ve got partners that are proactively investing in engaging with and marketing events, then that is appealing to rights owners.

HOST CITY: How can London compete with emerging markets in this space?

Iain Edmondson: We are one of the best in the world in terms of an event-going public, so there is an appetite to attend and physically spectate. We are also one of the best from a media perspective, to be able reach people who aren’t seeing an event in person, but through media channels and the press.

Our challenge compared to some competitors is the ability to justify large sums of investment up front from public funds, because the business case for investing multi-millions in destination marketing for a city that is already established is different to a new city that needs to make a mark.

But we are working with the Mayor and all the difference agencies in the city to demonstrate that you don’t necessarily need that. We can still work to provide a commercially successful event, without having a large cash downpayment where there isn’t necessarily an audience behind it. However, there are often other grounds for justifying public investment, such as the long term business benefits where London has proven to have invested wisely over the past decade.

HOST CITY: What do rights holders need to do make bidding more attractive to cities?

Iain Edmondson: Transparency is a must-have for public democratic processes where big money is open to scrutiny. We work in an environment where we expect to be asked awkward questions and justify the answers.

If a bid process is open and transparent, you can choose to engage or not. It’s just a minimum requirement that everyone can see up front the basis on which they are making decisions.

Another thing that is important is recognising the ability for rights holders to work in partnership with hosts. The city staffs the event and puts together commercial deals – they often become the people with the most invested in the success of it, so if the rights owner can work closely with the city and understand its aspirations for hosting it, it’s more often going to be a win-win on both sides.

For example, the ASO are very well resourced; they have looked after the Tour de France for a hundred years. We’ve had some good experience of working with them in 2007 and 2014 and they understand what the host brings.

But some smaller federations often don’t have the capacity to do a lot of detailed planning. The more they can work together and align the events with the expectations of host cities, the better.