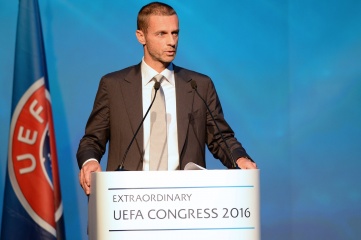 Travel restrictions and immigration policies could have a major effect on bids for tournaments and finals.

UEFA president Aleksander Čeferin has warned the United States and Great Britain that travel restrictions and immigration policies could have a negative effect on hosting future tournaments and finals.

The United States is one of the favourites to host the 2026 World Cup, but if President Donald Trump’s proposed travel restrictions are approved then it will “not help” the US bid.

Čeferin, who is also a FIFA vice-president, told the New York Times: “It will be part of the evaluation, and I am sure it will not help the United States to get the World Cup.

“If players cannot come because of political decisions, or populist decisions, then the World Cup cannot be played there. It is true for the United States, but also for all the other countries that would like to organise a World Cup.

“It is the same for the fans, and the journalists, of course. It is the World Cup. They should be able to attend the event, whatever their nationality is. But let’s hope that it does not happen.”

“If ‘Brexit’ happens, everything changes,” said Ceferin. “But football was played before, and it will be played in the future. Now, with free movement in the European Union, it is much better.”

Last year Paris St-Germain defender Serge Aurier was denied entry to Britain to play in a Champions League match against Arsenal. Aurier had been convicted for assault and was appealing the conviction. This is a concern for Čeferin.

“I was very disappointed when Aurier, from P.S.G., was not allowed to enter England,” he said. “That will worsen when ‘Brexit’ happens, especially if the reasons were as formal. We could have a serious problem.

“But if we see that players cannot enter because they have any sort of procedure ongoing, then we will simply think if we should play our European matches there.

“Neymar and Lionel Messi both have procedures going on. This year, the Champions League final is in Cardiff. Imagine if they did not let them in?

“That is a big thing for us, if players from England can travel anywhere but players from other teams cannot travel to England. With free movement in Europe, it is much better.

“Even in 2020, if ‘Brexit’ has happened, then it can be a big problem for fans. That stays firm, and we will speak to the British government, and I am sure the English Football Association will help us.”