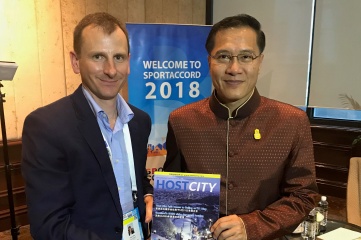 Host City: What is the main aim of Thailand’s event hosting strategy – is it direct economic impact or wider societal benefits?

Weerasak Kowsurat: We never draw any international games to the country for economic purpose. This happens afterwards, when you see people coming to the city and spending money, but it is never placed there as the main objective of why we bid.

Every time we bid it is because we think that it is time to generate a spiritual atmosphere for the locals to attend and understand better about sports. It’s more on the social side.

It is not a stadium that makes the city that looks lively; it is the population, the people who, after the sports events happen, are inspired to do more activities – either economically, socially or culturally. And we find we have been very successful in that direction.

Host City: Do you have plans to build any major new venues?

Weerasak Kowsurat: We have decided to think a lot more seriously about whether there are requirements to build more sporting facilities, because we think that unless we have a better plan of how we are going to use those facilities after the mega event, then we would prefer to make use of what god gives. And you see that in the Tri-league – swimming, biking, running – this is happening more and more in Thailand and we are getting more international participants who want to come here, not only because they want to be at the championship but part of our society.

See, Thailand has been voted internationally as the friendliest country in the world for around ten consecutive years. It pleased a lot of people, including ourselves, that the scenery is nice but the better part is that the people are nice. They may not all be able to communicate in international languages, but the body language is so friendly that it absorbs almost any activity, either sports or non-sports.

Also the weather is so amenable to almost any kind of sport – except winter sports! Then we have all year round sporting activities happening all the time. We have been working with at least 600 run and ride events annually around the country. With a population of 70 million population, this means we have at least 1,000 attending each event around the country.

See, sporting is not about winning or losing. It is an activity that you do with others. That will help to mix diverse people, regionally, domestically and internationally.

Thailand received 35 million international visitors last year, including a million Americans. We have a great variety of people coming into the country. Sport events can be looked at as a way in the modern society for different people to mix together.

Host City: What kind of events are most important to Thailand – sports, business or cultural events?

Weerasak Kowsurat: We have 1.2 million MICE travellers coming to the country every year. But that is not the biggest portion of activities we have – the largest is people travelling for tourism generally.

Host City: Thailand has not hosted a major multisport event since the Asian Games in 1998. Are you still focusing on smaller championships or will you bid for mega events in the future?

Weerasak Kowsurat: We have been talking about the Youth Olympics, but it depends more on what we would like to achieve; and we need to consult more with our people and find out what they are most interested in.

Having all the big sport leaders coming into town at SportAccord gives us a chance to see the whole list of all sports available on the planet. Maybe it’s time for our generation to pick and choose what to try.

It’s not about competing to be the host city; it’s about what the people in the city want to do.

In Thailand, the sports facilities that already exist have room to grow; we don’t want them to sit idle. At the same time, we also have what god makes: we have very nice scenery, we have two oceans, we have mountains and plains; and the weather outside is so amenable to sport. So instead of throwing away billions of dollars building something in concrete, why don’t we get people to go out and be friendly in the local atmosphere.