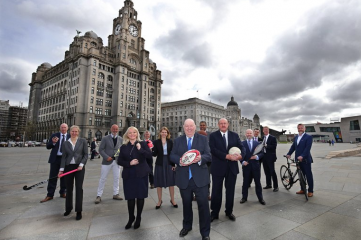 The 62-year-old Liverpudlian Barwick – who is chair of the Rugby Football League (RFL), Super League Europe Ltd, the National League and a member of the FA Council – will spearhead ‘Team Liverpool’ and the city’s drive to secure the event in 2026, or 2022 should the UK host the Commonwealth Games following Durban’s recent withdrawal.

Team Liverpool will feature a group of sports business experts with an unparalleled track record in successfully bidding for major sporting events, including the Olympic Games, the Commonwealth Games and the FIFA World Cup.

Barwick said: “Having worked in and around sport most of my adult life, the chance to lead the work for my home city of Liverpool to host the Commonwealth Games is a huge privilege.

“I am delighted to be involved in this project and clear that Liverpool, with such an illustrious sports history, will make the perfect host city for the Commonwealth Games.

“I have already spent some time with the team and am very impressed with their enthusiasm and expertise.”

Mayor of Liverpool Joe Anderson added: “I am delighted that Brian Barwick has accepted my invitation to chair the city’s bid to host the Commonwealth Games. He brings a wealth of experience both as a leader of some of the biggest sports organisations in the country and a successful career at the highest level in TV sport.

“Brian’s appointment, alongside a number of other highly respected advisors, sends out a powerful message that we are deadly serious about bidding for the games. We already have a first-class reputation in putting on major events during and since our time as European Capital of Culture in 2008.

“I firmly believe we have the passion, belief and the ability to win and deliver a Commonwealth Games that can make the whole country and the Commonwealth proud.

“The Commonwealth Games has the potential to be a game changer in further driving forward the city’s regeneration and renaissance, reflecting our growing confidence and attracting jobs, investment and profile that money simply can’t buy, putting us on the world map.

“The team of advisers now working with us is world class and over the coming months our priority is to put in place a compelling bid that will resonate with the Government, Commonwealth Games England and, ultimately, the Commonwealth Games Federation. These are exciting times for our city.”