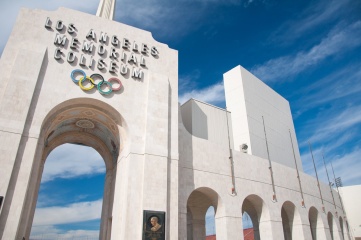 As a distance swimmer, Janet Evans broke seven world records and won five Olympic medals. But she is in a different kind of race now, as vice chair and director of athlete relations at LA24 – the bid committee for Los Angeles.

Los Angeles is one of four cities bidding for the 2024 Olympic Games, along with Budapest, Paris and Rome. How these cities interpret Olympic Agenda 2020, the IOC’s “strategic roadmap for the Olympic movement”, will be crucial to their success.

Evans spoke with Host City at SportAccord Convention about how her city’s ambitions are aligned with those of the International Olympic Committee (IOC).

Use what you already have

A primary challenge for cities bidding for and hosting the Olympic Games is to have venues that are used an on-going basis in the city, while also being optimised for Games time.

This is not only a logistical issue but also a financial and reputational one – so much so that the IOC, which holds the rights to the Olympic Games and brand, has placed venue sustainability at the heart of its strategy.

The first of the 40 recommendations of Olympic Agenda 2020 states “The IOC to actively promote the maximum use of existing facilities and the use of temporary and demountable venues.”

Evans says, “It’s interesting that 97 per cent of our venues will be built before 2024 irrespective of our bid. A lot of new venues are already going up for various sporting events within southern California. The only permanent venue we’d have to build would be a new kayak venue.”

The iconic Los Angeles Memorial Coliseum served as the Olympic Stadium in 1932 and 1984 and would take centre stage again in 2024. Over the years the venue has hosted NFL, Major League Baseball, soccer and entertainment events in addition to regular sporting events staged by its owner, the University of Southern California (USC).

USC Athletics is funding a US$270m renovation of the Coliseum that is planned, Evans says, “irrespective of our bid”. These works are scheduled to take place between 2017 and 2019.

Another big conundrum for host cities is how to accommodate athletes during the Games. As with sports venues, possible solutions include building for legacy use, or using temporary or existing facilities. LA24 has opted for the latter, arranging for USC and the city’s other big university, UCLA, to accommodate athletes on its campus during the Games.

“It’s a great place for athletes as there are a lot of training facilities,” says Evans. “A lot of our athletes in the US come through the university training system so we are very pleased with our choice of UCLA.”

Listen to the IFs

Another challenge faced by Olympic bidding and organising committees is to make sure their venue plans are in line with the priorities of the international federations (IFs) that govern Olympic sports. Many IFs have expressed frustration with the Organising Committee of the Olympic Games (OCOG) for Rio 2016, with construction running behind schedule.

Olympic Agenda 2020 sets out to avoid this happening in future by determining to “enhance the role of the IFs in the planning and delivery of the Olympic competitions, including the study of transferring technical responsibilities from the OCOGs to the IFs.”

Evans says having most of the venues already built enables LA24 to focus on engaging with IFs during the bidding phase; and events like Host City and SportAccord Convention give bidding cities the opportunity to do so.

“It’s wonderful to be here to listen and learn and understand what federations would like to see in a bid and help bring that into our bid and understand things,” says Evans.

Between January and April 2016, Evans and LA24’s sports director Doug Arnot met with all 28 Olympic IFs to ask them about their priorities for their sports. “It was a real listening and learning exercise, so we could go home and take that back to our team and say, here’s what this IF would really like to see.

“And another thing we feel is that if and when we win the Games, since our venues are built, we can spend seven years working not only on venues and upgrades but also on making the athlete experience great. So I think the sustainability of LA and the fact that our venues are built is really powerful.”

Athletes at the heart

Another key aim of Agenda 2020 is to “put the athletes’ experience at the heart of the Olympic Games”. This is the Evans’ main area of focus now –  “I know that’s what President Bach wants to see,” she says.

To achieve this, she is tapping into the US’s enviable network of Olympians and Paralympians – not just US natives but also Olympic alumni who have competed for other countries in the Games and now live in the US.

LA24 is running a road show of “Athlete Town Hall” meetings. “We want to ask for the input and advice of athletes. We felt there was no better way to receive that input than to speak to them in person.

The first Athlete Town Hall meeting was in the Miami and Fort Lauderdale area of south Florida in early April. LA24 is to conduct between 12 and 15 of these meetings over the course of 2016 in cities throughout the US.

“We see this as a national bid, not just a bid for the state of California or the city of Los Angeles. It’s a bid from our entire country to bring the summer Games back to the US for the first time since 1996.”

Another aim of Agenda 2020 is to achieve a “further blending of sports and culture”. Los Angeles is famed for its entertainment industry, but Evans says this is just one part of the mix.

“I think Los Angeles is in a true renaissance. We have US$88bn of infrastructure going into our new transport system, in our airport; our city is changing everything – it’s vibrant and hip. We have this great accumulation of the entertainment world as well as technology and creativity.

“I believe if we have the honour of hosting the Games there are so many interesting things we could do to help promote sport and bring youth into the Games. Los Angeles is a mecca of creativity, of innovation, of change and I think that’s evident when you come to our city.”

Recent allegations and revelations of doping and bribery in some Olympic sports are a reputational threat to the Games. Asked what LA24 can do to safeguard against these threats, Evans says “I think there’s a lot of joy and positive things that are in this movement. That’s what we all believe in – I believe in the Olympic movement and what it does for future generations and in what athletics can portray to the world.

“We want to bring the positive – I want to find out what the athletes can bring to other people. I want everyone to experience the Olympics for what they really are, which is what I see as the Olympics, which is this great celebration of humanity, peace and friendship and continuity.

“So I think that’s what we need to remember: the Olympics are an incredible movement and I’m just proud to be a small part of it.”