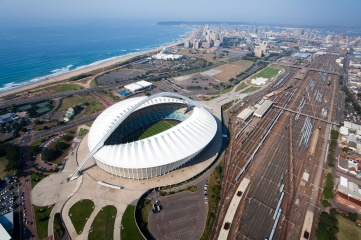 The Commonwealth Games has never been hosted in Africa, the region that has the most Federation members

The South African Sports Confederation and Olympic Committee has appealed to its African peers for support, hoping to win the lion’s share of votes in September 2015

Seeking support for its bid for the 2022 Commonwealth Games, the South African Sports Confederation and Olympic Committee (SASCOC) treated representatives from fellow African Commonwealth countries to dinner in Botswana on Sunday.

Africa holds great sway in the voting procedure: with 18 of the 70 CGAs, the continent is home to more Commonwealth Games Federation (CGF) members than any other region.

Tubby Reddy, CEO of SASCOC said in a statement “We do believe that with your support, our brothers and sisters of Africa, our bid will be successful, and to show the rest of the Commonwealth that it is indeed the African continent’s turn.”

The CGF does not employ a system of continental rotation for hosting the Games, but its constitution states: “The Commonwealth Games shall not be awarded in succession to countries in the same Region if countries from other Regions are making acceptable applications to act as hosts to the Commonwealth Games.”

In all its 22 editions, the Commonwealth Games has only been awarded three times to emerging cities outside Britain, Canada, Australia and New Zealand.

In a previous interview in the Spring issue of HOST CITY magazine, David Grevemberg, CEO of Glasgow 2014 said “Durban is emerging in some ways, but it’s got some regenerative aspects it could use the Games for – it’s hosted a World Cup competition.”

Discussing the future of the Commonwealth Games, Grevemberg said “One of the biggest challenges is to continue to make sure that the Games represent quality, quantity and universality.

“As the Commonwealth Games Federation moves forwards and future hosts come down, it’s about really making sure that the Games can manage all of that and perpetuate itself further by ensuring that it is continually relevant.”

“We ask for your support as our fellow African counterparts so that we win this bid and host this prestigious event in South Africa.”

The Canadian city of Edmonton is also bidding for the Commonwealth Games in 2022. Formal bid proposals are due to be lodged in March 2015.

The host city will be elected at the Commonwealth Games Federation’s General Assembly in Auckland, New Zealand in September 2015, when the 70 CGF Members will vote by secret ballot.