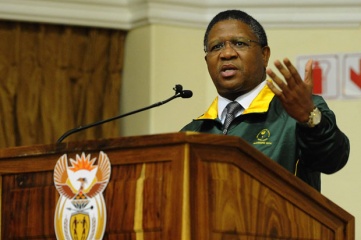 The honourable Fikile Mbalula, South Africa’s minister of sport and recreation, pictured speaking at the send-off for Team SA in 2014 (Photo: Government of South Africa)

South Africa is embracing the “now or never” opportunity to host the 2022 Commonwealth Games and is evaluating whether it could handle hosting the Olympics as soon as 2024, according to sports minister Fikile Mbalula

South Africa is certain to bid for the Olympic Games but will not rush into it now Durban is the only bidder for the 2022 Commonwealth Games.

Instead, the government and sports authorities are about to start a process of deciding whether it is feasible to bid for the 2024 Olympic Games so soon after Durban 2022.

“The Olympic Games will be the next thing. When? 2024? I don’t know,” said Fikile Mbalula, South Africa’s minister of sport and recreation.

“We now have the Commonwealth Games, but the fact that we will host [the Olympics] in the future and we will have an appetite is not off the radar,” he told HOST CITY at the launch of Durban’s Commonwealth Games bid in London last week.

With Edmonton pulling out of the race to host the 2022 Commonwealth Games, Durban is in pole position to be awarded the hosting rights on 2 September, subject to the Commonwealth Games Federation’s rigorous evaluation process.

The deadline for submitting a bid for the 2024 Olympic Games is less than four weeks later.

Asked if there is a timeframe for announcing whether South Africa will put in a bid for the 2024 Olympic Games, Mbalula said “Not at all. Look, the question is not like thinking on our toes.

“We know for a fact that we are here now for the Commonwealth Games and we are not like playing lotto, trying to catch everything at any time and going for the bigger prize.”

An important part of South Africa’s decision-making will be evaluating whether it would be able to provide the financial guarantees necessary to bid for the Olympic Games two years after the Commonwealth Games.

“It might not be the case,” Mbalula said, “like we were not in the position to back Olympics three years ago and we backed off because of the challenges we faced and the fact that we hosted the World Cup. We needed a breather.”

“We don’t want to do things that we will not be in a position to handle. We can handle the Commonwealth Games now – and if we look in the next two, three, six years to come, if we can handle the Olympics then we will look at that and make a proper evaluation about it.

“But it’s not like just a knee jerk reaction, because the world wants us to host and therefore we can – it’s not about that.

“We will do it – it might not be me, there will be somebody in this government that will have that challenge of hosting the Olympics in the future.

“And that will be most welcome. It’s a very important mega event that all nations aspire to host, globally.

“Our bigger prize now is the Commonwealth Games and we are embracing that with both hands.

“It’s now or never, and this is what we must embrace as a nation and move forward, and give opportunities to young people and those who grew up when South Africa was in total isolation.”

Any Olympic bid would be launched by the South African Sports Confederation and Olympic Committee (SASCOC).

“We as SASCOC and the government have not had any discussions in relation to a possible bid to host the Olympic Games. We would have to first sit down with government and look at what is feasible for the country. As yet these initial discussions have not taken place,” Mark Alexander, CEO of Durban 2022 and SASCOC board member told HOST CITY.