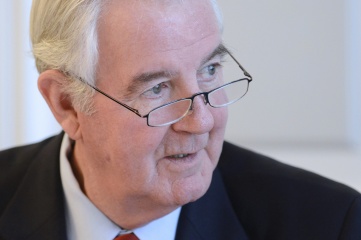 Sir Craig Reedie pictured at an IOC Executive Board meeting in Lausanne in 2013 (photo: IOC)

Speaking to HOST CITY the day after Oslo pulled out of its bid to host the 2022 Games, the IOC Vice President gives an insight into some of the topics he will discuss at Bid to Win on 28th October

The exit of yet another European city yesterday from the bidding contest for the 2022 Winter Olympic Games is regrettable, but the remaining candidates are strong and the bidding procedure is still the best in the world, IOC Vice President Craig Reedie told HOST CITY on Thursday.

“I regret the Oslo decision. But it’s their call and you have to respect their decision," he said. "It would have been nice to have a Games in Oslo, in a real centre of winter sport.”

On Wednesday Oslo followed Stockholm, Krakow and Lviv in retracting its candidature for the 2022 Winter Olympic Games, leaving Beijing and Almaty as the remaining candidates. Munich and St. Moritz had withdrawn from the race before the applicant stage.

The party with the largest membership in Norway’s coalition government failed to gain a majority support for Oslo's bid, with cost being cited as the primary concern – despite the country’s large sovereign wealth fund and a plan to use existing winter sports infrastructure.

“A number of cities decided not to go ahead because of domestic decisions taken in those countries, which were presented on the basis of a whole range of issues, some of which were cost,” Sir Craig Reedie told HOST CITY.

“I’m not sure that cost was a particular item in Munich’s decision or if people decided to do something else with their time and their efforts. If that’s the case then certainly the IOC has to look at the situation closely and find out if what they are currently doing is sustainable.

“There is an obligation on the IOC to present the benefits in a better way. We really have to prove that the recent Games have in the main all broken even with a small surplus. London was a good example – a small surplus run by a private company. And the infrastructure and stadium costs built by public money came in below the original estimates and will last for generations.

“We need to get that message across, so that future cities who are considering bids understand the difference. And the IOC makes an enormous contribution to the organising committee’s budget: the estimate for the 2022 Games was US$880.”

Reedie is confident that Beijing and Almaty are good potential host cities. “They passed the examination of the technical working group; they went from candidate city to applicant city. We’ve had a good hard look at them; with certain minor modifications, I think the technical people in the IOC are happy that good Winter Games can be had in both.”

There is no risk of Beijing or Almaty withdrawing due to cost concerns. “Neither of the other two cities have a financial issue,” Reedie said.

“The Chinese say they have a very happy memory of the Beijing Games and they can see doing it again. The Youth Games in Nanjing were terrific; they are clearly very committed to the Olympic movement and see the opportunity of developing winter sport in their country.

“In Kazakhstan they see the opportunity of the Games being a catalyst for their city and country, in a way that nothing else ever could be.

“So I pretty certain that they both will go ahead and impress the evaluation commission; they will produce good bid books and we’ll have good contest to decide in Kuala Lumpur.”

The bidding process will not change - yet

The bidding process for the 2022 Games will not change even though there are just two candidates left.

“You can’t change the rules of the game halfway through the game simply because one city has decided not to go ahead. So we’re happy to have both of them,” Sir Craig Reedie told HOST CITY.

How the IOC will run its bidding process beyond 2022 is currently under review, as part of the Olympic Agenda 2020.

One suggestion made by four European National Olympic Committees was that the recommendations of evaluation commissions should count as votes in the host city elections. “Having chaired the last evaluation commission, I thought our report was very accurate and we pointed out plusses and minuses for all three cities, so nobody could remotely say they hadn’t been informed,” said Reedie.

“That said, one of the strengths that the IOC has is that 100 plus members actually decide, and when you’ve got that number of people deciding, you are probably on a much safer basis in terms of the quality of the decision.

“I think at the moment the IOC has the best election process in world sport. People may think that’s a funny thing to say when a perfectly valid potential city has withdrawn, but it’s just as valid now as it was yesterday. It is an excellent and highly authoritative system. Now whether that system will proceed going forward is what we are going to discuss over the next few months, and no doubt we will discuss in London on 28th October.

To read the full interview with Sir Craig Reedie, read the next issue of HOST CITY magazine – or better still, register for Bid to Win at www.bidtowin-hostcity.net and join in the discussion on 28th October