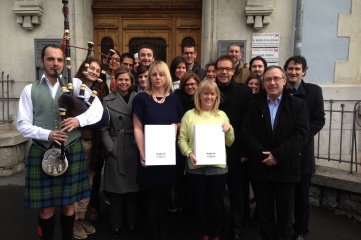 And this is just one of a series of important meetings with international sports bodies scheduled for the year.

Further visits from international federations will take place over the next two to three weeks, an EventScotland spokesperson told Host City, as Scotland continues to bid for and secure the right to stage some of the world’s most prestigious events.

Glasgow is hosting the 2018 European Sports Championship with Berlin. And Glasgow will also welcome the world of sports, business and cultural events to Host City 2016 on 16 and 17 November.

Glasgow is one of four potential hosts of the 2019 Indoor Athletics Championships and, if successful, would be the first Scottish destination for a European Athletics event in 15 years.

The other cities competing to host the 2019 European Athletics Indoor Championships are Apeldoorn (Netherlands), Minsk (Belarus) and Torun (Poland).

Evaluation site visits are underway during February and March, before the Evaluation Commission files a report to the European Athletics Council.

The Council will vote on which city will host the 2019 championships on 23 April at its meeting in Amsterdam after presentations by the bidders that meet the requirements of the evaluation process.

“In recent years Glasgow has established itself as one of the world’s top sporting cities thanks to our investment in new facilities and our international sporting events programme,” said Depute Leader of Glasgow City Council and Chair of Glasgow Life, Councillor Archie Graham OBE.

“Athletics has been at the very heart of our rise as a world-leading sporting city. This weekend’s Glasgow Indoor Grand Prix will take the sport to a new level and we hope to build on that success with the 2019 European Athletics Indoor Championships, which would see Europe’s top athletes return to the Emirates Arena. Our aim is to deliver a world-class event with athletes and spectators at its very heart.”

As well as meeting with bid partners, including the Scottish Government, EventScotland, Glasgow City Council, Scottish Athletics and British Athletics, the group toured the Emirates Arena.

The itinerary also includes a visit to proposed training venue Scotstoun Sports Campus, and an assessment of Glasgow’s ability to accommodate hundreds of athletes and, potentially, thousands of tourists.

“This weekend’s 2016 Glasgow Indoor Grand Prix has sold out months in advance, demonstrating the huge support for elite athletics there is within the Scottish public,” said Niels de Vos, Chief Executive of British Athletics.

“I’m delighted that Glasgow City and EventScotland decided to build on the success of the 2014 Commonwealth Games and previous British Athletics events held in the city by bidding to host European Athletics’ flagship indoor event at the Emirates Arena in 2019.”