Home
»
News
»
SASUKE/Ninja Warrior competition may debut at the Olympics 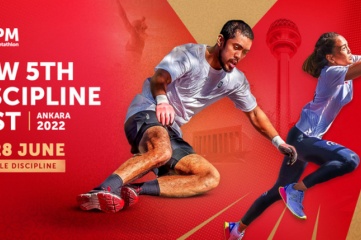 [Source TBS]: Tokyo Broadcasting System Television, Inc. (TBS) is pleased to announce that it will collaborate with World Obstacle, the Fédération Internationale de Sports d’Obstacles (FISO) and the Union Internationale de Pentathlon Moderne (UIPM) to test a SASUKE/Ninja Warrior obstacle course event as a proposed new 5th discipline of the Modern Pentathlon for inclusion in the Los Angeles 2028 Olympic Games.

SASUKE/Ninja Warrior is a megahit sports entertainment program broadcast on TBS since 1997. It is currently seen in over 160 countries around the world, and local versions are produced in over 20 countries.

Modern Pentathlon is an Olympic sport consisting of five disciplines: fencing, swimming, equestrian show jumping, laser pistol shooting, and running. UIPM announced in May 2022 that an obstacle course would be tested as a potential replacement for the riding discipline in the Modern Pentathlon after the 2024 Paris Olympics.

According to the UIPM, two types of obstacle sports will be tested, one of which is Ninja Competitions, a sport made popular worldwide by the SASUKE/Ninja Warrior programs. The first test competition is being held as a collaboration between UIPM and FISO in Ankara, Turkey on June 27 and 28, immediately after the UIPM 2022 Pentathlon World Cup Final in Ankara.

At UIPM and FISO’s request, TBS has agreed to provide a Ninja Warrior obstacle course for use as a demonstration of the event in Ankara. This obstacle course is currently used to film local versions of the SASUKE/Ninja Warrior format shown in France, Poland, and other European countries. The Wall Flip, Parallel Pipes, Wind Chimes and Tire Swing obstacles will be featured.

Pentathletes and obstacle athletes from around the world will practice on June 27 for the competition on June 28. The test event in Ankara gives the best pentathletes in the world a chance to compete for the first time along with obstacle course athletes.

Dr Klaus Schormann, President said: “UIPM has undertaken a comprehensive and transparent process to transform Modern Pentathlon into one of the most popular, accessible and exciting sports on the Olympic programme. The upcoming first Obstacle Discipline Test Event in Ankara will be an important step and we look forward to watching pentathletes and obstacle athletes test themselves on the obstacles provided in collaboration with TBS and FISO.”

Ian Adamson, President, FISO said: “We are thrilled to be collaborating with TBS and the UIPM on the new 5th discipline. Obstacles have a long history in pentathlon, and introducing a new discipline that is practiced and watched by millions of people in over 160 countries in the form of SASUKE/Ninja Warrior shows has the potential to widen the audience for all stakeholders and enhance the appeal of the sport on the Olympic programme.”

Sophia Hernandez (Guatemalan pentathle said: “I’m feeling excited to try the Obstacle Discipline, and hoping it will be fun and cool to do. I’m also a bit nervous about the difficulty of it. But I think it will be interesting and a good opportunity for everyone taking part. I have watched Ninja Warrior, I love seeing how they race and it’s always fun. It’s impressive to see how some people manage to get through really tough courses.”

Taro Muraguchi, Program Producer at TBS said: “I am very excited to hear that the program that began in 1997 on TBS has become popular around the world and may now expand its reach even further.  I am really looking forward to seeing SASUKE/Ninja Warrior on the Olympic stage as a Modern Pentathlon event.”

Miho Takashima, in charge of the global SASUKE/Ninja Warrior format, said: “SASUKE/Ninja Warrior, which continues to win fans around the world, represents the culmination of TBS's long history of content development. We look forward to working with the UIPM and FISO to further expand the possibilities of obstacle racing.”