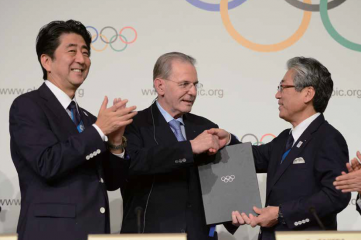 The race to host the 2020 Summer Olympic and Paralympic Games was a tightly fought campaign, right until the allimportant secret ballot in Buenos Aires.

In the first round of voting no clear frontrunner emerged: Tokyo fell just short of a majority, with the remainder of votes split evenly between Istanbul and Madrid. In the run-off round that followed, a slender four vote lead enabled Istanbul to progress to a final round of voting, in which Tokyo garnered 60 votes to Istanbul’s 36. Scenes of jubilation from Japanese delegates ensued. After the initial elation of winning the bid, Tokyo is now faced with the reality of preparing for the biggest event in the world. “It is a huge task to host the Olympic and Paralympic Games, but it is also an incredible honour as well as extremely exciting,” bid CEO Masato Mizuno tells HOST CITY.

“This post-election phase is a period of transition, during which time we must create the Organising Committee. Our primary job is to now establish the committee in collaboration with the Tokyo Metropolitan Government, the Japanese Olympic Committee and the central government. The entire nation, or ‘Team Japan,’ will work together in a unified effort to deliver the Games in 2020.

“Our promise to the IOC is to deliver a superb Games in 2020. Delivering early will allow us to focus on the extras that will make the difference between the Games being good or fantastic.”

Different degrees of risk
IOC Vice-President and IOC member in Great Britain, Sir Craig Reedie chaired the Evaluation Committee that assesses the bid cities’ capacity to hold the Games. “The three cities that remained in the race all put together very coherent and first class candidatures,” he reminds HOST CITY. “The Games could be run in any one of these three cities, but they all presented different projects with different degrees of risk.”

Each city faced its own challenges, from the badly damaged Fukushima nuclear plant in Japan and the plight of the Spanish economy to the Turkish authorities’ reaction to the Gezi Park protests in Istanbul.

If the promise of opportunities in new regions was the defining feature of Rio and PyeongChang’s winning bids for the 2016 and 2018 Games, this time it was guarantees of stability that would clinch the matter. With Spain floundering in a turbulent global economy and with public protests disrupting Istanbul’s bid, Tokyo was considered to be the safest bet.

The Tokyo 2020 team highlighted the commercial potential of holding the games in Asia and Tokyo’s USD 932m sponsorship revenue forecast. “Tokyo had its funding in place, it had a pretty compact plan using reclaimed land in Tokyo Bay and they benefitted from the fact that they still have a number of the splendid buildings that were built for the 1964 Games,” says Reedie.

The destruction caused by the 2011 tsunami in Japan and the leaks that followed at the Fukushima nuclear plant became a major focus, which Prime Minister Shinzo Abe tackled head on in Buenos Aires. Describing Tokyo as “one of the safest cities in the world,” Abe told IOC members: “Some may have concerns about Fukushima. Let me assure you, the situation is under control. It has never done and will never do any damage to Tokyo.”

At the same time as representing a risk factor, the disaster also created a powerful emotional aspect to the bid. Paralympian Mami Sato, whose home town was devastated by the Tsunami, emphasised the point that sport and the Olympics had the potential to reinvigorate and rebuild Japan following the disaster.

“They were very grateful to the rest of the world for the sympathy and help they had when they suffered the tsunami,” says Reedie. “The IOC contributed to the fund and the Olympic movement rallied round. So to that extent they were grateful and therefore it was emotional.”

Public support was another challenge that Tokyo faced throughout the bid process. “In early 2012, the first IOC figures suggested that only 47 per cent of the population was behind us,” says Mizuno. “We worked intensively to improve support for the Tokyo 2020 Games, and indeed it grew steadily, especially once people celebrated Japan’s medal success at London 2012. A halfmillion spectators turned out to cheer our national heroes during Japan’s first-ever parade for Olympic medallists.

“We were pleased that the IOC survey in March confirmed 70 per cent support and that the most recent figures are around 90 per cent, according to a survey by the Ministry of Education, Culture, Sports, Science and Technology.”

Keep it compact
Fifth-time bidder Istanbul was viewed by many as the frontrunner for much of the campaign. But as well as the controversies surrounding the Gezi Park protests and recent doping scandals involving several Turkish athletes, Istanbul’s bid was also hindered by the wide scope of its concept.

“Quite clearly the transportation issue was the one that concerned the Evaluation Commission and there was no doubt, despite claims made, that some venues would involve a considerably longer travel time than some of the other cities,” said Reedie. “The larger amounts of money that were being spent weren’t being spent simply for the Games; they were being spent to keep the city moving.”

Reedie points out that hosting the Games can leave a lasting legacy without the need for the huge amounts of capital spending proposed for Istanbul and seen in London.

“London chose to develop the most deprived part of the capital and that’s been the most wonderful legacy – but it’s not a condition of bidding for the Games. The IOC doesn’t say we need you to spend billions of dollars. It’s your call as a city; and in fact we go out of the way to separate the organising committee budget and the non-organising committee budget. What cities frequently do is use either the bidding for the Games or the winning of the Games as a catalyst to do things they might not otherwise.”

Could you host the Games?
There can be only one winner, but Reedie says the strength of all three bids and the commitment put into each one is testament to how important the Olympic Games is to cities and nations around the world.

“At the end of the day all three cities presented wonderfully well. It’s not often the IOC is blessed with three Prime Ministers, from three candidates, all coming from the G20 summit in St Petersburg all the way to Buenos Aires to make their presentations. It just gives you some idea of the regard in which hosting the Olympic Games is held and the importance of it to the cities and the countries who support them.”

The newly elected IOC President Thomas Bach recently revealed he wanted a far greater range of countries and cities to bid for future Games. Baku in Azerbaijan and Doha in Qatar were the two other applicant cities that failed to make it to the candidature stage of bidding for 2020 and the likes of Nairobi, Casablanca and Taipei are considering bids for the 2024 Summer Games.

Reedie says the success of London 2012 is stimulating interest the world over. “The Olympic brand and the Games are now at a very high level after the success of the London Games and it would be a very good thing if more cities applied in future years to host summer, winter and youth Games. “There is a feeling out there that you have to spend vast amounts of money to do it; I don’t believe that to be the case. There are many cities with lots of sports facilities which could be used to host the Games.”