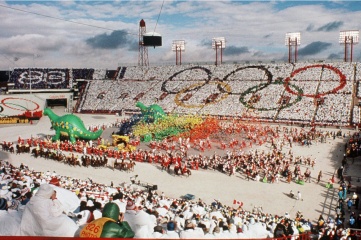 Calgary, host of the 1988 Games, is bidding again for the Winter Games (Photo: Canadian Olympic Committee)

With Graz and Sion dropping out, the 2026 contest has echoes of the 2022 bidding competition

When the Austrian Olympic Committee abandoned the Graz 2026 Olympic campaign in early July, it came just weeks after voters in Switzerland rejected Sion’s bid in a referendum citing high costs – again raising concerns about the Olympic brand and bringing into question the IOC’s bidding procedure.

In April, the IOC was sitting pretty with a healthy field of seven candidates. But people power has now torpedoed two bids and some of the other five bidders are on shaky ground. Calgary in Canada, Erzurum in Turkey, Sapporo in Japan, Stockholm in Sweden and a possible Italian bid remain, with the IOC still to decide which of them to put through to the candidature phase in October – if they are all still standing.

A series of withdrawals from the 2022 and 2024 Olympic bid contests triggered the IOC’s “Agenda 2020” revamp of its bidding procedure. But the messaging to potential Olympic cities around the globe about reducing Games costs – mainly by maximizing the use of existing and temporary facilities – is clearly still not getting through.

The demise of Graz 2026 underscored the issues. Failure to win public and political support for an Olympic project makes bidding a big financial gamble.

The Austrian Olympic Committee spelled out the problem. Despite proposing a Winter Games in line with Agenda 2020 and, latterly, the IOC’s ‘New Norm’ measures designed to further slash costs – along with a  Graz 2026 feasibility study that outlined multiple benefits for the region – the bid was halted.

“Because of the political arguments currently taking place, the ÖOC greatly regrets that there has to date been no clear political backing, nor any corresponding support from the Styrian state government – something which the ÖOC regarded as essential, right from the start,” the committee said.

“Under these circumstances, a project of this scale is not viable, and certainly not internationally justifiable.”

Graz’s defeat, eight months after Innsbruck’s 2026 campaign was derailed by a referendum, was another blow for the IOC hot on the heels of Sion’s exit.

The IOC could doubtless do with fewer referendums bringing negative headlines for the Olympic brand, but officials would prefer a bid to be sunk now rather than the middle of next year, causing even more damage.

“The IOC fully understands the decision taken by the Austrian National Olympic Committee and respects their view that they do not wish to become part of a local political dispute since the Olympic Games should always be a unifying force,” the IOC commented on the collapse of Graz 2026.

By this time next year, it seems unlikely there will be five bids left battling for 2026 hosting rights. While the IOC would like a European 2026 host, IOC president Thomas Bach said recently he had no problem with a third Winter Games heading to Asia after PyeongChang and Beijing.

Sapporo, host of the 1972 Winter Olympics, is seen as a safe pair of hands if the other 2026 bidders fall by the wayside. Sapporo officials have wavered over whether to bid for the next winter edition or wait until 2030, but Bach’s remarks may persuade the city to stay in the contest.

Calgary’s 2026 campaign, on thin ice a few months ago due to political concerns, received a boost in June when the Canadian Olympic Committee voted unanimously to support the bid from the 1988 Winter Games host city.

“This represents a very important and positive next step towards Calgary’s candidature for 2026,” said Canadian Olympic Committee president Tricia Smith. “We will continue to work with all the relevant stakeholders to build momentum to ensure an inspiring and responsible Olympic bid.”

In the coming months, the bid will launch a public engagement effort to convince city residents and the wider population of the benefits. But the Olympic bid may face a referendum in November, which could scupper Calgary’s aspirations.

The Italian Olympic Committee (CONI) is not rushing its decision on a candidate city. On 11 July, CONI’s executive board decided to submit a bid to the IOC – but it delayed the announcement on whether the city will be Milan, Turin, Cortina d’Ampezzo or a joint effort. An evaluation committee will assess the Olympic feasibility studies of the three contenders before presenting a report to CONI’s National Council. Italy’s candidate city will be chosen in August or September. The Italian government said in early July that it would support a 2026 bid under certain conditions. But political infighting may prove the bid’s undoing in the long run.

The eastern Turkish city of Erzurum is an unknown quantity. After a handful of failed attempts by Istanbul to host the Summer Olympics, it’s the country’s first push to land the winter version. Although largely unknown outside Olympic circles, the host of the 2011 World Universiade Winter Games and 2017 European Youth Olympic Winter Festival has some traction within the Olympic movement.

Stockholm appears favourite to secure the 2026 Olympics. The
Swedish bid has joined the other cities at IOC workshops and video conferences over recent months to enhance its Olympic plans. Bid officials say they’ve received good feedback from IOC executives and experts during the dialogue phase of the bidding process.

And Stockholm has struck a deal to use the Sigulda sliding track in Latvia for bobsleigh, skeleton and luge events, addressing one of the IOC’s biggest concerns about the bid.

Despite being on a firm footing, Sweden’s national elections in September may impact Stockholm’s bid. Government backing is necessary to pursue the city’s Olympic quest.

An October decision by the IOC executive board will determine which bids enter the one-year candidature phase, which concludes with the host city vote in September 2019.