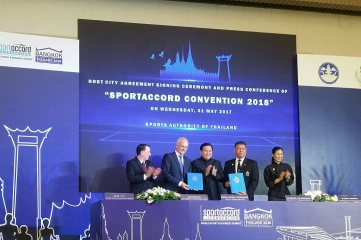 The signing event was carried out at the Sports Authority of Thailand (SAT) building with Nis Hatt, Managing Director of SportAccord Convention, H.E. General Tanasak Patimapragorn, Deputy Prime Minister of Thailand, and H.E. Mrs. Kobkarn Wattanavrangkul, the Minister of Tourism and Sports of Thailand.

“Hosting the SportAccord Convention in Bangkok enables us to reach out to all the International Sport Federations and those organisations involved in the business of sport to share our sports tourism vision as well as enabling delegates to experience all that Thailand has to offer. The Tourism and Sports Ministry is a key driver in helping to promote Bangkok and Thailand as a sports dream destination and sports hub in Asean, and these are some of the reasons why the SportAccord Convention is an important event for us as the Host City.” said Mrs Kobkarn.

With state-of-the-art venues and a city brimming with opportunities and cultural gems, Bangkok is host to many world-class events, and in 2016 served as the gateway for over 30 million tourists who visited Thailand.

Commenting on Bangkok becoming the next Host City, Nis Hatt said, “SportAccord Convention is delighted for the Convention to come to Bangkok, Thailand, and our host should be commended for

“We are already making good progress with preparations for next year’s Convention and I am confident we will be able to deliver a memorable event in Bangkok for our delegates.”

The overarching theme for the sixteenth edition of the SportAccord Convention will focus on marketing and sponsorship with further details being revealed once registration opens in June. The Convention will also see new initiatives including a 3-day sports festival where all International Federations along with their National Federations will be invited to take part. In addition, the event is being promoted as a ‘family affair’, thus making Thailand the vacation destination for delegates and their families in 2018.

Bangkok was announced as the next Host City during the spectacular SAC2017 Opening Ceremony in Aarhus, Denmark, this year’s European Capital of Culture.