Home
»
News
»
The next stage for Scotland 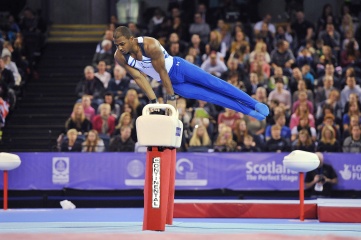 Glasgow is hosting the World Gymnastics Championships in October 2015

2014 was a momentous year for Scotland and major events were at the heart of the excitement. The great success of the “best ever” Commonwealth Games in 2014 was followed by an acclaimed Ryder Cup.

“We’ve been putting Scotland forward as the perfect stage for events for a number of years,” Paul Bush OBE, chief operating officer of EventScotland told HOST CITY magazine. “What came out of last year is that it was a step change for us.”

The successes of 2014 have provided a platform for future hosting successes, building on proven strengths that EventScotland refers to as the “four Cs”: capacity, capability, credibility and confidence.

“Our capacity, in terms of number of volunteers, transport, infrastructure and accommodation, is now recognised around the world,” says Bush. “As for capability, all the events were delivered as the best ever or recognised some of the best.

“Credibility is about reputation; the experience of people coming to our events was high. And the feedback we had from the local population was extremely positive – they didn’t see the events as an impediment; they saw them as something to be proud of.

“And that’s given us the confidence to look bigger and better in the future. The international federations now have great confidence in bringing their events back to Scotland this year.”

Outside the cities, Scotland is hosting seven golf tournaments back to back this year. The Open Championships takes place in St. Andrews this year while the Women’s British Open takes place in Turnberry in Ayrshire.

The World Orienteering Championships, which has record number of entries already this year, takes place in Speyside, the countryside around Aberdeenshire.

And the UCI Mountain Bike World Cup is taking place in Fort William again in what has become an annual Scottish fixture.

“We’re really cognisant of the fact that we’ve got to spread the benefit as much as we can across the country,” says Bush.

“That’s not always possible because the facilities and the infrastructure are often the driver, but using our natural landscape is really important to us.

The European Eventing Championships, the final qualifying event for Rio 2016, is in the tiny village of Blair Atholl in Perthshire. “The infrastructure that will be needed to put up around that will be huge, and that will really showcase the landscape of that area.”

The 2014 Ryder Cup was hosted on a greenfield site at Gleneagles. Despite the influx of 50,000 people a day, there were no problems in getting people to and from the event – thanks to a transport infrastructure group set up by the Scottish government to look after major events. Initially set up for the Commonwealth Games and the Ryder Cup, this group has since maintained its position within Transport Scotland to ensure the smooth operation of all major events.

Major cultural events are also an invaluable part of Scotland’s hosting portfolio. Glasgow was the European City of Culture in 1990, hosted the MOBOs in 2009, 2011 and 2013, the MTV Awards in 2014 and is hosting the Turner Prize in 2015.

“Glasgow is recognised as one of the cultural gems of Europe; it has a huge history and heritage within contemporary arts,” says Bush, pointing out that three of the last five Turner Prize winners were educated at the Glasgow School of Art.

“The MTV Awards got to a totally different demographic in terms of young people. MTV communicates through social media –their ticket sales for Glasgow were activated through Facebook, they don’t rely on traditional routes at all.”

Scotland nurtures its own cultural events that are incredibly valuable to the economy. The Edinburgh Festivals bring in around £262m each year, while Hogmanay alone brings in over £30m each year.

“We’ve got some great gems in the cultural portfolio that we want to sustain and grow,” says Bush.

Business events are also an increasingly important feature of Scotland’s event strategy. “Meetings, corporate events, incentives, associations – these have now become part of our portfolio and we are looking to see how the synergies work between these different types of events,” says Bush.

Mass participation is another area where Scotland is keen to grow and diversify. Bush cites the London Prudential Ride and Melbourne’s Ride the Night, which attracted a quarter of a million people into the city centre between dusk and dawn, as examples.

“We are looking at pressing different buttons, accepting the fact that we are not going to get the Ryder Cup or the Commonwealth Games every year, or even every lifetime. “The big thing for us is to ensure that people who come to events become repeat visitors in the future.

“Last year, most people’s perceptions of Glasgow were changed and they realised what a great city it was to come to. A lot of cities have stigmas attached to them. But people thought this is a great city, it’s a really fun place to come to and the people are really welcoming.”

How to become a world class host

So, how can other cities and countries around the world follow this example build themselves into world-leading event destinations?

“You’ve got to invest in good people and you’ve got to give those people the time, the ability and the confidence. In Scotland we started this in 2001 – that’s 14 years ago. “But probably the most important thing in terms of long term success is your ability to deliver and the reputation that comes from that.”

International conventions for the event hosting industry are precious few, but make the most of these, says Bush. “They are really important because they provide that ideal opportunity to get everybody in one place in the world to rekindle those relationships.”

This interview was first published in the Winter 2014/15 Issue of HOST CITY magazine. Since then, Glasgow has been awarded the hosting rights to the new 2018 European Sports Championship.