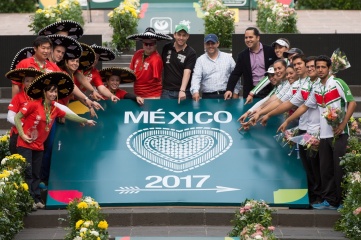 Mexico City has simultaneously been awarded the right to host archery’s two biggest events : the World Cup Final in 2015 and the World Championships in 2017.

Mexico is a fast-growing region for the sport, developing into a key market for international archery following the team’s success at the London 2012 Olympic Games. Mexico was the only nation to put two athletes on the same podium at London 2012, with Aida Roman winning recurve women’s silver and Mariana Avitia winning bronze.

The hosting rights were awarded through a bidding procedure.

“There is a formal bid process, with candidate cities, countries or federations submitting a World Archery-standard bid document and questionnaire, which is usually supported by an additional dossier produced by the LOC,” a spokesperson for World Archery told HOST CITY.

“Our Executive Board votes on its preferred hosts based on this bid documentation.”

Poland and Ukraine had also put in a joint bid for the 2017 World Championships. The World Archery federation was founded in Lviv and a bid is anticipated for future event, particularly as the 2019 World Championships will be the 50th edition.

And for the 2015 World Cup Final, South Korea was the other party interested in hosting rights.

“It is a sport on the rise in popularity and participation and there is a significant audience for its international events and athletes within the country,” de la Vega said.

2015 will be the second time that Mexico has hosted the Archery World Cup Final, after hosting the inaugural World Cup Final at the Mayapan Pyramids in 2006, when nearby Merida also hosted the World Archery Youth Championships.

Mexico City hosted the Olympic Games in 1968 and has also hosted the Pan American, Caribbean and Central American Games.

Mexico City promoted its candidature by creating the Mexican Challenge, first held at the end of 2013. The innovative event – produced by Moveo Lab, the sports company that will organise both the newly-awarded tournaments – pitched eight of Mexico’s finest against eight top archers from the rest of the world.

World Archery Secretary General Mr Tom Dielen said “With the Mexican Challenge concept, this organising committee proved that it shares our values of putting athletes at the heart of international archery competition. We are confident it will build on that success with two of World Archery’s flagship tournaments.”

The two tournaments offer very different dynamics. The annual World Cup Final is held over a weekend, features the year’s top 32 athletes and focuses on individual match-play and sports presentation. The final of the 2014 Archery World Cup will be held in the Olympic capital of Lausanne, where World Archery has its headquarters.

The biannual World Championships involve more than 500 archers from 70 nations over ten days. The 2015 World Archery Championships will be hosted in Copenhagen.

For future events, prospective host organisations can contact World Archery directly to see which events are currently open for bidding.