Louise Martin: Just believe in yourself and do it - Host City News

Home
»
News
»
Louise Martin: Just believe in yourself and do it 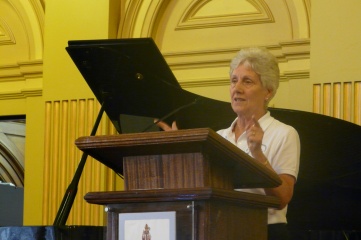 Having led the bid for Glasgow’s universally-acclaimed Commonwealth Games and served as long-standing Honorary Secretary for the Commonwealth Games Federation, it came as no great surprise – except to her – when the news emerged that she was planning on running for the position of President of the Federation.

“It was made public much earlier than I was expecting it to come out, because we are not calling for nominations until May,” she told HOST CITY.

Despite this, she was happy to talk about her motivation.

“It’s the right time for me now because I have served for four quadrennials on the Federation as the Honorary Secretary.”

Her decision to stand was driven in part by changes to the Federation, which is being remodelled as a corporate structure with a President and three Vice Presidents.

“The Honorary Secretary position ceases to exist, so I had to decide what to do,” she said.

“One of the positions would be doing what I have already been doing and having done four quadrennials, it’s time for me to move – and the only way I can move is up.”

She revealed to HOST CITY that she has long had the ambition to lead the Federation. “It’s something I’ve always thought I would love to do.

“Having chaired a national sporting agency, sportscotland, with 350 staff and a turnover of millions, I know I can do it. I’ve been chair of Commonwealth Games Scotland and I’m also chair of the Commonwealth Advisory Body on Sport, so I have got experience behind me.

“The time is right for me to put my hat in the ring.”

Although she has not yet formalised a manifesto, she was happy to discuss the changes that she has in mind for the federation – particularly in relation to the role of the member associations.

“We have to have a proper structure and good governance in place, to make sure that all the associations are more vibrant and more effective.

“As far as I am concerned we are all equal; we all have one vote, irrespective of size or wealth. We have to deliver equally, across the board.

“One of the things I want to ensure that we do is to communicate more effectively and more openly.”

With the 2022 Games now faced with just one bidding city, Durban – for which Martin is leading the evaluation commission – the Federation is looking at ways to boost the appeal of its major property.

The situation is analogous to the issues the IOC grappled with over the last twelve months as it handled its own 2022 Games crisis through the Agenda 2020 review of its bidding procedure.

“I certainly want more cities to bid for the Games. We want to make it more appealing and we need to make sure that we keep it affordable,” said Martin.

“So one of the things we have to do is work very closely with the international federations to ensure that the sports and the events that we deliver are not cost- prohibitive.

“We’ve got to make sure that the events are accessible for the whole of the Commonwealth and that those bidding cities can deliver a good and successful Games.”

“One of the things we want to try and take control of is to encourage the countries that cannot host either of those to host a Commonwealth Championship in a specific sport that they are good at.”

“I want to make sure that Commonwealth sport offers more to athletes and to individuals in communities that we are working with.

“I’ve got to ensure that we really make the most of all the opportunities that we have. We are a dynamic sporting movement and we do transform lives through sport.

“We’ve got so much potential in the Commonwealth; the momentum has started and we’ve got to keep it moving.”

Much of this momentum comes from Glasgow 2014, which was widely regarded as the greatest Commonwealth Games in history. Having led the bid, Louise Martin describes it as “a dream that took 12 years to come to fruition, and it did in a big way.

“I can’t believe it’s all over; it’s funny to say that it’s not there anymore, but everybody’s still talking about it.

“It set the scene and we delivered exactly the way we wanted to deliver: athlete-centred, sports-led, we kept it small, we kept it the way that we in Scotland are – we didn’t try to emulate anybody.”

There may be some advice for Durban here.

“Never try to be something you aren’t; don’t try and copy. Deliver for yourself; stay true to yourself and your own ambitions and everything will work out.

“We proved it can be done, and I would encourage anybody to follow that example. Just believe in yourself and do it.”

Louise Martin is speaking at HOST CITY 2015 - the leading EU-based meeting of cities and sports, business and cultural events - in Glasgow on 9th and 10th November.