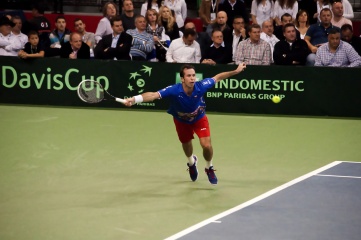 The International Tennis Federation (ITF) is planning to invite cities to bid to host the Davis Cup final from 2018.

Currently, each of the matches is hosted by one of the teams competing in that match, including the final.

"Right now we know who are in the finals but we don't know where it is going to be," ITF President David Haggerty told Reuters.

"It is really hard to plan and get viewership and fans excited," he said. "If you have a fixed site, people can begin to plan and look ahead.

He is proposing a new system whereby the final will be hosted in a host city in a neutral nation to be decided in advance.

"This is a way to unlock potential revenue which will help grassroots tennis," he told Reuters.

This system is also used by the UEFA Champions League where the final is held in a neutral host decided two years before the event, and the NFL’s Super Bowl final where the is host city is decided three to five years in advance.

"This is all part of our mission to make the appeal of tennis broad and wide," said Haggerty, who was elected president of ITF in 2015. "Davis Cup is 135 nations."

The ITF is also reported to be considering shortening matches and expanding the Fed Cup to include 16 nations.

Haggerty anticipates the price cities would pay for hosting the final will be "significant".

"We're waiting for cities to distinguish themselves," he told Reuters. "And we'll see what it is. I don't want to prejudge what it might be."

The proposals will be voted on by the ITF membership in August 2017 for implementation by 2018.

Haggerty anticipates a successful bid covering more than one year. "The most likely scenario would be for two-to-three-year terms," he said.

Croatia will host the 2016 Davis Cup final on 25 to 27 November, after they won their semi-final against France in Zadar, but a host city has not yet been named.

They will play Argentina, who beat Great Britain in a semi-final in Glasgow on16 to 18 September.

The current system gives little time to engage fans in the build-up to the event. "Last year we had a fantastic final in Ghent. But the reality is, Britain could have sold out the (13,000-capacity) stadium. Belgium could have sold it out, too.

"Our mission is to make tennis broad and wide. We have 700,000 spectators that come to Davis and Fed Cup each year... about 3.6 billion people view it on TV, but it's got to be more than that.

"It's got to be bigger than that, and with a neutral final venue we can work with our broadcast partners and make it a much bigger show than just two nations that know they're playing each other.”