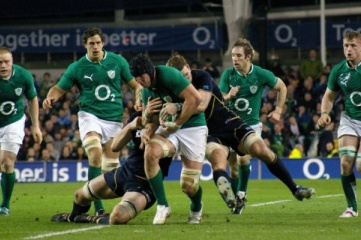 With several nations expressing interest before bidding begins, the IRB looks set to find a safe pair of hands for its flagship event and invest in the game worldwide

The bidding process for the 2023 Rugby World Cup has yet to be announced but several countries have already expressed an interest, with key figures in Ireland and Argentina speaking out on the subject over the course of the week.

Leo Varadkar, Minister for Transport, Tourism and Sport said in an interview with Newstalk that hosting the World Cup would be an achievable target for Ireland, with “at least 50/50” chance of winning a bid.

“It’s probably the biggest thing that Ireland can do, as a small country. You could never really have the Olympics in Dublin; we wouldn’t be able to do the Euros, but we could do the Rugby World Cup.

“New Zealand, which has inferior infrastructure, fewer people and is further away from the big rugby markets did really well.”

Varadkar also stressed that an Irish Rugby World Cup would be a profitable one. “There is a cost of upgrading some of the stadiums… and you do have to pay the IRB a big fee to host it – somewhere in the region of EUR 120m. If we can get more people than came to New Zealand then we can bring in the region of EUR 200m in tax revenues.”

The International Rugby Board (IRB) has not yet set its fees and the bid process is not expected to be launched until later in the year. Nonetheless, countries are positioning themselves early to bid for the event.

Argentina’s IRB Council Representative Agustin Pichot confirmed in December 2013 that his country would bid for the 2023 event. England player Paul Tait is another longstanding proponent of an Argentinian Rugby World Cup as a way of internationalising the sport.

“With growth comes progress and for international rugby this has seen an increased awareness outside of the traditional strongholds,” Tait wrote on his blog this week. “The landscape will continue to evolve and having Argentina host Rugby World Cup 2023 would contribute to this by directly rewarding excellence and encouraging progress.”

Recent editions of the Rugby World Cup have loosely alternated between Southern and Northern hemispheres. The 2023 edition will follow two northern editions: England 2015 and Japan 2019.

Whether the IRB will consider a FIFA-style continental rotation policy remains to be seen. The Rugby World Cup is the IRB’s main breadwinner, accounting for more than 90 per cent of revenues.

And with the IRB investing more than £330m worldwide between 2009 and 2016, a solid financial return from the World Cup will be seen as a major priority to enable the development of the sport internationally – wherever the event is hosted.

Other nations interested in hosting the 2023 World Cup include South Africa, France, Australia and Italy.

Speaking to HOST CITY from the IRB’s Dublin headquarters, head of communications Dominic Rumbles said “We are delighted that there is such a strong level of initial interest in hosting Rugby World Cup 2023.”

“To see such interest before the tender process has been launched further underscores the enormous prestige of the Rugby World Cup brand in the global marketplace.”

Explaining why there is such interest, he said: “Increasingly, governments and local agencies are seeing the event as a strong economic, trade, tourism, profile and feel-good platform and a means to inspire young people to get active, which is great.”

This view is backed up by Varadkar. “The most important thing from a government point of view is participation,” he said.

“More people are participating in sport than in the past – it’s around 47 per cent now, which is a big improvement. There are health benefits, psychological benefits and there are social benefits, and that’s why governments get involved in sports.”

Speaking to delegates at a Bandon Rugby Football Club event on Thursday, MEP Sean Kelly said a Rugby World Cup bid is “an opportunity for Ireland and we should do all we can to seize it.

“It could be a hugely historical all-island event, with massive economic and tourism benefits.”

The former president of the Gaelic Athletic Association emphasised the strength of the country’s infrastructure – a key consideration in evaluating bids for major sports events.

“Ireland could easily accommodate the 377,000 or more visitors that the Rugby World Cup would bring to the country.”