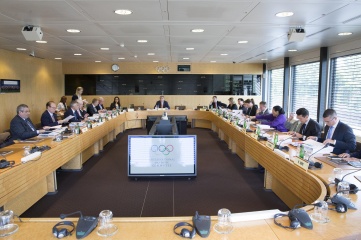 The decision was made at an Executive Board meeting in Lausanne.

The International Olympic Committee (IOC) suspended its recognition of SportAccord on Sunday, saying it is ready to discuss restructured representation with the organisation’s stakeholders.

The IOC had recognised and worked with SportAccord, the “umbrella group” for Olympic and non-Olympic sports federations, for many years.

Many international federations (IFs) of Olympic and non-Olympic sports have since left SportAccord.

Despite Vizer’s resignation last week, the IOC has withdrawn its recognition of SportAccord.

“The IOC will continue its ongoing and direct relationship with the IFs and other members of the Olympic Movement,” the IOC said in a statement issued during an executive board meeting in Lausanne.

“We encourage and support them in all the initiatives being taken to restructure their representation following the serious internal problems of SportAccord.”

“We have been in contact with many of the IFs and their representative bodies in the last days and we have been advised that they want to take some measures in this respect.

“We would like to invite the representatives of different groups to further discuss this issue and to come to an agreement among all stakeholders.

SportAccord has historically provided support to IFs to ensure the integrity of their sports – a role that the IOC will take up directly during SportAccord’s current circumstances.

“In the meantime, we do not want the clean athletes to suffer in any way from this vacuum. We are offering the IFs concerned all the services and advice in the fight against doping which have been offered so far by SportAccord and financed by the IOC and WADA.

“We will be making the same offer with regard to good governance as well as on match-fixing and related corruption, and the IOC is ready to provide this support directly. We must ensure that there is not a vacuum during this ongoing process.

“Like many members of SportAccord, we are suspending our recognition and we will withhold our funding until these questions are answered and an agreement between the stakeholders has been reached.

“We are awaiting the outcome of the consultations and, when the time is right, we would like to invite these stakeholders here to discuss how services can best be provided in the future to the above-mentioned organisations.”