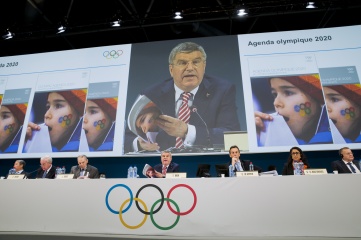 The invitation phase is a key component of Olympic Agenda 2020

The bid process for the 2024 Olympic Games is now open, with the IOC launching a new “invitation” phase of discussion with interested NOCs

This new consultative approach, launched four weeks after the adoption of Agenda 2020, will help NOCs to ascertain the viability of bidding for the Games before committing in full.

These early discussions with the IOC have the potential to reducing the cost of bidding and organising the Games for cities – one of the key aims of Agenda 2020.

The concept of “shaping the bid process as an invitation” has been central to the Agenda 2020 review right from its inception.

Another key aim of Agenda 2020 with regard to bidding process is to strengthen the evaluation of bid cities to more clearly highlight key opportunities and risks.

Until now, the bidding process for the Olympic Games has been split into two phases – the “applicant” and “candidature” phases, which will now follow the invitation phase.

In the applicant phase, cities send in an application file which is studied by an IOC working group, who assess the bid for the IOC executive board. If approved by the board, the bid then progresses to the candidature phase, which requires much more detailed plans in the form of a candidature file and site visits.

Interested NOCs and cities will now be able to receive “various levels of assistance and feedback” between now and the 15 September deadline for officially committing to a bid.

“Bidding for the Games is not a tender for a franchise, and there is no one-size-fits-all solution,” the IOC said in a statement.

“The bid process is about making proposals and offering solutions that will deliver excellent Games, with no compromise on the field of play for the athletes while also meeting the needs of the city and region to ensure the Games leave a positive, long-term, sustainable legacy.”

Cities considering bidding for the Games are encouraged to place greater emphasis on the use of existing, temporary and demountable venues.

During the invitation phase, the IOC will inform interested parties of the “core requirements” necessary to organise the Games in order “to assist interested cities and their NOCs to develop a project that best meets each city’s unique long-term development needs.”

The IOC also expressed its satisfaction with the “strong interest" in hosting the 2024 Olympic Games, with the NOCs of Germany, Italy and the United States already indicating their intention to bid.