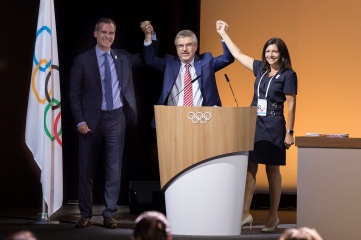 Los Angeles and Paris are now both set to become Olympic hosts in September, but who will get to stage the Games first?

The membership of the IOC on Tuesday unanimously approved the proposal to award the hosting rights of both the 2024 and 2028 Games at the next IOC session in Lima in September.

The unprecedented decision means both cities currently bidding for the 2024 Games – Los Angeles and Paris – are set to become Olympic host cities, subject to agreement from the respective cities and national Olympic committees over which city will host which edition.

"We are ready to work with them on this 'win-win-win' approach," said Emmanuel Macron, President of France who attended the IOC session in Lausanne.

Paris Mayor Anne Hidalgo said: "I am fully committed with the Paris team to putting all my energy, our creativity and my resolve into reaching an agreement for Paris to experience once again this Olympic adventure that it has been longing for for 100 years."

Prior to this decision, Paris has ruled out hosting the Games in 2028, while Los Angeles had not dismissed this possibility. The city that hosts the 2028 Games is expected to ask for concessions from the IOC.

"In Olympic history there's only been 37 times in which there has been a tie for a gold medal. Maybe today is the 38th," Los Angeles Mayor Garcetti said. "For Los Angeles, it's a golden opportunity, one that we don’t take lightly."

The IOC proposal approved by the IOC membership is as follows: "Recognising the exceptional circumstances and unique opportunities presented by the candidatures of Los Angeles and Paris for the Olympic Games 2024, the International Olympic Committee takes the following decision:

1. To authorise the IOC Executive Board to conclude a tripartite agreement with Los Angeles and Paris and their respective NOCs for the simultaneous election of the host cities of the Olympic Games 2024 and 2028 during the 131st IOC Session in Lima;

3. Should such tripartite agreement not be concluded, the 131st IOC Session will proceed with the election of the host city 2024 in accordance with the current election procedure."

Earlier in the day, the delegations of Los Angeles 2024, led by Mayor Garcetti, and Paris 2024, led by the President of the French Republic, Emmanuel Macron, made outstanding and emotional presentations at the 2024 Candidate City Briefing.

"Ensuring the stability of the Olympic Games for 11 years is something extraordinary," the IOC President said later at a press conference with the two mayors and leaders from the two candidatures.