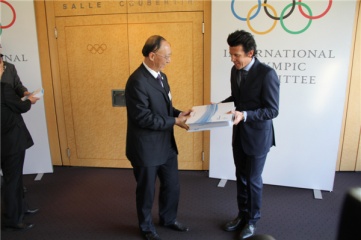 Almaty and Beijing submitted their candidature files to the IOC on Tuesday highlighting Agenda 2020 compliance, which IOC says will apply to the 2022 Winter Games

The two candidate cities for the 2022 Winter Olympic Games submitted their candidature files to the International Olympic Committee in Lausanne on Tuesday.

Both candidates, Almaty and Beijing, highlighted how they amended their bids to take into account the Agenda 2020 reforms approved by the IOC in December, with IOC president Thomas Bach confirming the IOC will work with the candidates to apply the reforms.

“Working with the two Candidate Cities, we will apply the first reforms which have been approved by the IOC members very recently in Monaco as part of our Olympic Agenda 2020 roadmap,” said IOC president Bach on Tuesday,

“This will be done through ongoing consultation with the Candidate Cities.”

Developed over the course of 2014, when several European cities pulled out of bidding for the 2022 Winter Games, Agenda 2020 introduces a number of changes to make bidding for and hosting the Games more sustainable, affordable and beneficial for cities.

Almaty and Beijing have retrospectively adjusted their bids to incorporate some of the IOC’s recommendations and reforms.

“Many recommendations of Agenda 2020 were taken into consideration while developing the concept of the 2022 Winter Games,” said Mrs Zauresh Amanzholova, vice mayor of Almaty City.

“We believe our bid is a perfect fit with this new philosophy and brings essential benefits to the Almaty and Kazakhstani people.

“Almaty 2022 can be a catalyst for social, economic and sports growth in the region where winter sports facilities are badly needed.”

Janez Kocijančič, vice president of the International Ski Federation was in Monaco for the approval of Agenda 2020. He told HOST CITY “Almaty plan to build their winter sport capacity,” but could not reveal details of the scope or potential cost of the work.

Agenda 2020 promotes the use of existing and temporary infrastructure to reduce infrastructure costs for bidding cities. While both bids require significant infrastructure development, Almaty would need to invest more than Beijing, which incorporates the more developed resort of nearby Zhangjiakou into its candidature.

“Our Candidature File embodies the requirements of the IOC and the philosophy of Olympic Agenda 2020,” said Mr Wang Anshun, president of the Beijing 2022 Olympic Winter Games Bid Committee and mayor of Beijing.

“The important concept of running athlete-centred, economical and sustainable Games will be represented well in our bid and actual organisation of the Games in 2022.”

The successful candidate will receive an estimated US$880m contribution from the IOC, derived from marketing and broadcasting revenues as well as “assistance provided to the Organising Committee by the IOC and related entities”.

For the first time, the Host City Contract will be made public, as recommended by Agenda 2020. The host city will also be bound to the new principle of non-discrimination on sexual orientation.

Kocijančič also made comments to HOST CITY that could be interpreted to support the view that Beijing represents the richest potential for the development of winter sports in Asia.

“Europe is where skiing and most winter sports were born and have their home, but regarding the development of the sport it would be very wise to go east.

“Because there are tremendous changes in the modern world – the countries are changing, the social structure, there are more and more people who can afford skiing.”

Asked which country represents the biggest market, he said “Everybody knows China is China… and Kazakhstan is Kazakhstan.”

René Fasel, IOC member and president of the International Ice Hockey Federation went further still, breaking IOC rules by telling local press during a junior championship event in Toronto, "This is a fact, China is a favourite."

Anything can happen in a bid campaign however and the coming months will be critical for both candidates.

The evaluation commission will inspect Almaty’s sites from 14 to 18 February and Beijing’s from 24 to 28 March and publish their report on www.olympic.org before the briefing for IOC members that will take place from 9 to 10 2015.

The appointment of Russian IOC member Alexander Zhukov as chair of the evaluation commission is interesting, as his country neighbours and has strong ties with both China and Kazakhstan – potentially reducing the cost of the evaluation process without compromising objectivity.

The host city for the 2022 Olympic Winter Games will be elected at the 128th IOC Session in Kuala Lumpur following a final presentation by the cities to the full IOC membership on 31 July.

The IOC has informed candidate cities that they can make their candidature files public, and the candidates will inform HOST CITY if and when this happens.