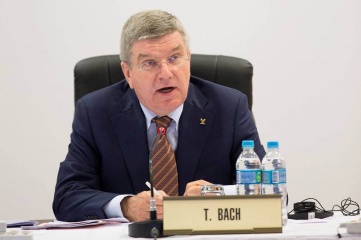 In an address to the Danish National Olympic Committee (NOC) Congress on Thursday, IOC president Dr Thomas Bach made it clear that the choice of host city is not an endorsement of a country’s political system, because the IOC is politically neutral.

He also explained how the Host City contract now prevents discrimination of athletes and binds the organisers of the Games to uphold international agreements applicable in the host country.

The theme of the NOC Congress was called “Can Sport Save the World?”

Sport can do this through the universal law of fair play, he said. “Regardless of where we practice sport, regardless of who is playing sport, the rules are the same. They are recognized worldwide. They are based on a common ‘global ethic’ of fair-play, tolerance and friendship.

“This means in sport all people are equal. In order to be able to apply this universal law worldwide and to promote this global ethic sport must be politically neutral. If not, we could not ensure the equal treatment of all people without any kind of discrimination – sport would be torn apart by politics.

“We have seen this in the past with some political boycotts which did not serve any good purpose. Furthermore, boycotts are a fundamental contradiction to the spirit of sport depriving it of the means to work for peace, mutual understanding and solidarity.

While remaining politically neutral, the IOC must consider the political implication of its decisions, Bach said.

“This is most obvious when it comes to choosing the venues for major sports events, above all for the biggest and most important of these, the Olympic Games. Because already a candidature for the Olympic Games draws the world’s attention to the candidate country. This is even more true for the host country with the additional economic implications and investments.

“It means however that in every country where we organize Olympic Games, we want to send the strong message of tolerance, respect and fair play. It means that we require compliance with all the values of the Olympic Charter for all participants at the Olympic Games.”

Bach gave examples, such as how the IOC asked for and received assurances that Russia’s law prohibiting the public promotion of homosexual orientation would not apply to any of the participants of the Olympic Games.

He also cited how the IOC raised the issue unpaid migrant workers on the Olympic sites, leading to more than 500 companies being investigated and more than US$ 8m in unpaid wages being paid to 6175 workers.

In another example, he pointed out that the IOC made the internet fully accessible to all participants of the Youth Olympic Games in Nanjing.

Agenda 2020 has created a new clause in the Host City Contract that “the organization of the Games must comply with local, regional and national legislation and international agreements and protocols applicable in the host country with regard to planning, construction, protection of the environment, health and safety and labour laws.”

And through its Agenda 2020 review, the IOC has amended the Olympic Charter to state: “The enjoyment of the rights and freedoms set forth in this Olympic Charter shall be secured without discrimination of any kind such as race, colour, sex, sexual orientation, language, religion, political or other opinion, national or social origin, property, birth or other status.”

Bach said this language “mirrors the text of the United Nations Universal Declaration of Human Rights.”

“It is the responsibility of the IOC to ensure the application of the Olympic Charter at the Olympic Games. At the same time we must acknowledge that we have neither the mandate nor the capability to change the laws or the political system of a sovereign country.”

The full text of the speech is available here.