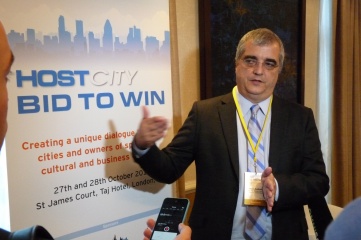 Rio 2016 communications director Mario Andrada said of last year’s HOST CITY event: “I was very impressed. I didn’t realise there is a market for cities that are bidding for so many things. I was very pleased with the conference because the people who I spoke with were very focused and professional. It was a pleasure and I learned a lot”

HOST CITY builds on the great success of its 2014 event by launching HOST CITY 2015: The Largest Meeting of Cities and Sports, Business and Cultural Events, a Conference and Exhibition on 9th and 10th November

HOST CITY has launched “HOST CITY 2015: The Largest Meeting of Cities and Sports, Business and Cultural Events” – a major conference and exhibition to take place on 9 and 10 November 2015.

With 100 per cent attendee satisfaction, HOST CITY: Bid to Win in 2014 was acclaimed as the optimal setting to network with and learn from peers in the business of hosting major events.

The HOST CITY 2015 Bid to Win ConfEx will again create a unique dialogue between cities and rights holders of sporting, cultural and business events, on a bigger scale than ever before.

The 2015 conference will focus on how cities and rights holders can work together to deliver successful, safe and sustainable sporting, cultural and business events. These range from mega events such as the Olympic Games and World Expos to major business, scientific and cultural events.

In an increasingly competitive global market, cities are hosting a wider range of events to attract a greater share of global trade and investment. HOST CITY 2015 provides the platform for them to work together to attract, build and host the greatest events in the world.

Rights holders will announce plans for their events and share insights on bidding for and hosting their properties. Cities will share their experiences of building a portfolio of sports, business and cultural events that attract investment and benefit society.

With a mix of panel discussions, keynote addresses and case studies focussed on mega events, transport, security, business and cultural events, HOST CITY 2015 highlights the issues and opportunities facing everyone in the business of city events.

“We were very pleased with the overwhelmingly positive reaction to Bid to Win and very proud to present the HOST CITY 2015 Bid to Win ConfEx,” said event chairman and editorial director Ben Avison.

“The world’s most highly regarded speakers will cover all aspects of bidding for and hosting major events.

“We look forward to welcoming you to HOST CITY 2015: Bid to Win, The Largest Meeting of Cities and Sports, Business and Cultural Events on 27-28 October.”

Book your place and discuss sponsorship and exhibitor opportunities with Adam Soroka on +44 (0) 203 077 8732 or adam.soroka@bric.com