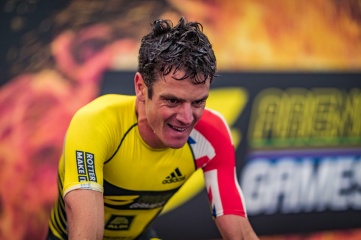 [Source: Super League Triathlon] London and Rotterdam will play host to two cutting edge professional triathlon events as the SLT Arena Games Powered by Zwift heads to Queen Elizabeth Olympic Park on March 27 before a spectacular return to the Netherlands on April 18.

British Olympic medal hopefuls Jonathan Brownlee, Georgia Taylor-Brown and Alex Yee are already confirmed to take on the unique blend of real life and virtual racing in London, with more star names to be announced for both events in the coming weeks.

The SLT Arena Games Powered by Zwift took the triathlon world by storm on its debut in Rotterdam last year, drawing a huge audience thanks to its innovative and exciting indoor race concept, and leading to the 2021 events securing global broadcast deals that cover more than 100 territories.

Athletes complete three rounds of fast and furious action. The swim takes place in an Olympic sized pool and the bike and run legs on static equipment with the racing realised in the virtual world of Zwift, the world’s leading online training and racing platform, providing detailed data insights and up close and personal emotions of the competitors.

Super League Triathlon CEO, Michael D’hulst, said: “We are continuing to grow the SLT Arena Games Powered by Zwift and make it part of Super League’s yearly offering of exciting professional triathlon. Bringing an event to London is a big step for Super League and in line with our objectives for 2021 as we look to grow rapidly into key triathlon markets. We are also delighted to return to Rotterdam, which is where the SLT Arena Games Powered by Zwift started with a spectacular debut event.

“Broadcasters have recognised the success of the concept and the partnership between Super League Triathlon and Zwift, which has led to a major expansion of our global distribution so sport fans can watch live wherever they are in the world.

“We will make a few small tweaks to the format to improve the events further and have put together some fantastic line-ups. I can’t wait to see so many Olympic hopefuls racing at full throttle.”

“The first SLT Arena games was a true spectacle, and an ideal broadcast and spectator event,” says Eric Min, CEO & Co-Founder of Zwift.

“It’s great that the series will return, supported by Zwift. As a resident of London for many years, I’m particularly looking forward to seeing the next round in March in the beautiful Olympic pool in Stratford.

“Super League is today announcing the first athletes that will be competing in London, with a further eleven, plus the field for Rotterdam, to be released in the coming weeks.”

The  announcement focusses on a wave of British stars taking part in a home event, with World Champion Georgia Taylor-Brown and double Olympic medallist Jonathan Brownlee taking on a host of big names, including stars of longer distance triathlon such as Ruth Astle and George Goodwin.

The first edition of the SLT Arena Games was held in Rotterdam in August 2020 with more than 600,000 fans watching across Super League’s digital channels alone as Jessica Learmonth and Justus Nieschlag secured the inaugural titles.

The athletes face three stages of swim, bike and run, with the order of the legs shuffled every round. Each swim is 200m, bike 4km and run 1km.

The events will also be supported by Garmin, who will integrate the use of the Forerunner 945, HRM Pro and Tacx NEO 2T smart trainer to deliver even more data and insight to fans.