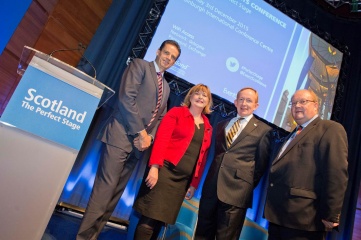 Strong partnership is the key to success, according to the leaders that attract events to Scotland and the Australian state of Victoria

Strong partnerships are the key to delivering a flourishing events and festivals portfolio, according to Brendan McClements, Chief Executive of Australia’s Victorian Major Events Company and Paul Bush OBE, VisitScotland’s Director of Events.

The driving forces of two of the world’s most successful event destinations spoke to Host City at the National Events Conference on 3 December 2015 at the Edinburgh International Conference Centre. The conference focused on “Scotland the Perfect Stage”, the recently refreshed National Events Strategy for 2015-2025.

“You can’t do this by yourself, you need people to help. When I was reading through ‘The Perfect Stage’ strategy it was the first time I’d seen another nation highlight so clearly that we need this as a fundamental component of building success and how to use it to our advantage,” Brendan McClements, Chief Executive of Australia’s Victorian Major Events Company told Host City during the conference.

After an unprecedented year for major events in Scotland in 2014, which included the Ryder Cup and Commonwealth Games, the nation is now looking forward to hosting the 2018 European Sports Championships, 2019 Solheim Cup and UEFA EURO 2020.

McClements has been responsible for attracting some of the world’s most prestigious events properties to the state of Victoria, including the 2015 Cricket World Cup, Formula 1 Australian Grand Prix and the incredibly popular artistic and cultural celebration, White Night Melbourne.

In his keynote speech at the conference, McClements emphasised Scotland’s pre-eminent position in encouraging and facilitating the public, private and third sectors to work in unison in the delivery of its events and festivals portfolio, valued at £3.5bn per year to the Scottish economy.

“Major international events, and indeed small-scale events that support local communities, all of which have a number of stakeholders, can only achieve successful outcomes for all parties if everyone buys into the same plan. Sustainable events cannot survive on a command and control model,” he said.

“Events are complicated; you need to build a coalition of people who want to work with you,” he told Host City. “You are talking about governments, councils, local authorities, local services, industry, venues, airports, transport authorities, rights holders and so on,”

Paul Bush OBE, VisitScotland’s Director of Events, explained how partnership working drove one of Scotland’s most recent successful bids, for the 2019 Solheim Cup at Gleneagles.

“We had 23 partners as part of our Solheim Cup bid including local bodies such as Creative Scotland and the Edinburgh International Festival. Bringing these bodies together you really see the value of working together; it’s broken down the silo mentality,” he told Host City.

“It’s brokered by people trusting each other, but ultimately you’ve got to put a system in place that maintains the momentum. It’s really an organic process that needs to become systemic; it needs to maintain its integrity when people leave.”

The Scotland’s First Minister and Victoria’s Premier established a Memorandum of Understanding during the 2014 Commonwealth Games in Glasgow in relation to securing major events.

“We share a lot of things in confidence. They are not a competitor, as they are on the other side of the world, but it’s good to share intelligence about how you work with rights holders and which new cultural products to launch,” Bush told Host City.

Cultural events is a key area where Scotland has inspired Victoria. “The Edinburgh International Festival is outstanding example of what can be achieved in the cultural space. Any city in the world would look at this and think, how can we achieve this,” said McClements.

“It’s certainly informed our thinking of what’s possible. We have an event called White Night that’s drawn on models from all over the world. The Edinburgh experience helped inform what we wanted to do with that event. Edinburgh is the gold standard.”

This strategic, coordinated approach is not exclusive to Scotland and Victoria. Bush cites Copenhagen as a “fantastic example”, and also points to Auckland, London and “pockets in North America”.

“Having multiple hosts is a natural outcome. New Zealand are our siblings, so there is a high level of cooperation.

“Hosting the 2015 Cricket World Cup with New Zealand was no more complicated than any other major event that takes place in two locations. The organising committees made sure there was investment in communications.

“The plan was well coordinated – this was delivered seamlessly, all the way through the public and private sectors. The government piece of the puzzle was well sorted out. Time spent getting that right really paid off for Victoria.”

Victoria hosted a disproportionately large number of big games during the Cricket World Cup, including the opening as well as the final match. 350,000 people attended World Cup matches in Victoria in total, 153,000 of whom were from outside the state and 75,000 from outside the country, resulting in AU$300m of spending in the state.

In 2015 Melbourne also hosted Rugby League State of Origin series, one of Australia’s biggest sporting events. 92,000 people attended, 40,000 of whom were from outside Victoria.

“It’s been an extraordinary fiscal year for Victoria, where you can see and taste the benefits that major events can bring. We’ve set a new benchmark for what major events are capable of,” said McClements.

The National Events Conference was opened by Fiona Hyslop MSP, the Cabinet Secretary for Europe, Culture and External Affairs and Dr Mike Cantlay OBE, Chairman of VisitScotland. Cantlay emphasised the need for continued investments in infrastructure, digital connectivity and air connectivity for Scotland to continue securing and delivering the next generation of events.