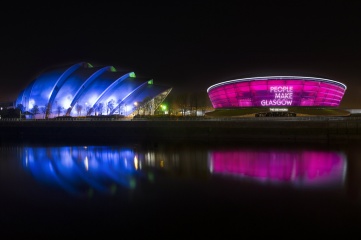 The SSE Hydro is lit up in the colour of the city’s PEOPLE MAKE GLASGOW brand to celebrate Glasgow City Marketing Bureau’s 10th birthday.

As Glasgow City Marketing Bureau (GCMB) celebrates its 10th birthday on Friday, the bureau revealed that major events secured, supported or managed by GCMB in collaboration with city partners over the past decade have injected nearly £230 million into Glasgow’s economy; attracting 4.6 million attendances.

During the past 10 years Glasgow has welcomed some of the biggest events and brands in the world to the city, from the Commonwealth Games, UEFA Cup Final and the World Irish Dancing Championships to Olympic football and the torch relay, BBC Radio 1’s Big Weekend and the MTV Europe Music Awards (EMA).

“The decision to bring MTV’s most prestigious international awards show, the EMA, to Glasgow in 2014 was the culmination of several years working with the city,” said Bob Bakish, President and CEO of MTV’s global parent company, Viacom International Media Networks.

“Throughout that time we found Glasgow’s dedicated team to be a fantastic partner to work with – forward-thinking, creative and flexible, with a good understanding of how they can best contribute to the successful staging of major events.”

The legacy of last year’s Commonwealth Games will bring a number of coveted major events to Glasgow in the coming years, extending the city’s world-class sporting and cultural events portfolio until 2020.

“Glasgow’s willingness to strategically work with British Gymnastics over many years was instrumental in winning the bid to stage the prestigious 2015 World Gymnastics Championships – an Olympic qualification event – in the city later this year.”

Glasgow’s ability to attract the very best major events was further demonstrated recently with the announcement that the city will co-host the inaugural, multi-sport European Sports Championships with Berlin in 2018, following a decision by some of Europe’s top sports to bring together their prestigious European Championships for the first time, including cycling, swimming and athletics.

The event, which will attract a projected TV audience of around 850 million, will see nearly 3,000 athletes travel to Scotland in the summer of 2018 as part of a total delegation of around 8,200 including officials, media and others.

All these events are underpinned by a diverse range of year-round events held in Glasgow – from Celtic Connections, Glasgow Film Festival and Glasgow International Comedy Festival to the Merchant City Festival, Piping Live and the World Pipe Band Championships and more.

Glasgow’s investment of some £300 million in state-of-the-art infrastructure, including the SSE Hydro and the Emirates Arena, has extended the city’s world-class venue offering and capacity.

“In its first year the SSE Hydro delivered an economic impact of £131 million and celebrated being the second busiest arena in the world,” said John Langford, Director of Live Entertainment at The SSE Hydro. “GCMB plays a pivotal role in supporting this success, through the development of world class content and tirelessly spreading the Glasgow gospel!”

A new “Major Events Charter”, launched after the Commonwealth Games, has further strengthened the city’s reputation for winning and delivering major events. This refreshed charter guarantees the provision of exceptional support for major events coming to the city – with Glasgow the only destination in Europe to make this promise to global event organisers.

HOST CITY 2015, the largest meeting of cities and cross-sector events in the EU, is taking place in Glasgow on 9th and 10th November.

“Glasgow is a city with a sense of self belief that oozes confidence. We’ve been through a rite of passage, overcoming industrial decline and reinventing our economy to become a leading example of city regeneration,” said Councillor Gordon Matheson, Leader of Glasgow City Council and Chair of Glasgow City Marketing Bureau.

“A real strength has been the resilience of our tourism sector and, more specifically, our strategy of attracting a diverse portfolio of major sporting and cultural events coupled with significant investment in new world-class venues.

“We have the infrastructure, the skills and expertise, and above all the friendliness, energy and can-do attitude of the people of Glasgow, which makes this city the complete package.

“In an increasingly competitive global events market, Glasgow is now firmly established as a major player with a hugely ambitious events industry and we will continue to punch above our weight for many years to come.”