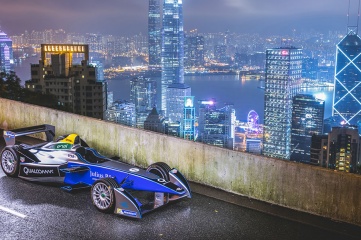 Formula E makes its debut in Hong Kong on October 9, 2016

The bidding process for the 2017/18 season of Formula E, the world’s first fully-electric racing series, is about to open for interested cities

Formula E on Tuesday said it would be inviting expressions of interest from new prospective host cities to join the 2017/18 calendar.

The structured selection process will be managed by London-based firm The Sports Consultancy, whose co-managing director Robert Datnow is speaking at Host City 2016 – the largest meeting of cities and sports, business and cultural events.

Successful hosts will be announced in June 2017, subject to approval of the FIA World Motor Sport Council (WMSC).

“We have enjoyed remarkable growth over the first two seasons of Formula E and now have partnerships with some of the most iconic cities in the world and cutting-edge automotive brands,” said Formula E CEO Alejandro Agag.

“There is now a unique opportunity for new cities to join our calendar and share in the continued exponential growth of the championship.”

The FIA Formula E Championship races on the streets against a backdrop of some of the most iconic host cities, including New York, Marrakesh, Buenos Aires, Monaco, Paris and Montreal.

The inaugural season of Formula E launched in September 2014 around the grounds of the Olympic Park in Beijing.

According to Formula E, the championship represents “a vision for the future of the motor industry, serving as a platform to showcase the latest innovations in electric vehicle technology and alternative energy solutions”.

The rights holder anticipates that the further opening of regulations in future seasons will allow manufacturers to focus on developing motor and battery components.