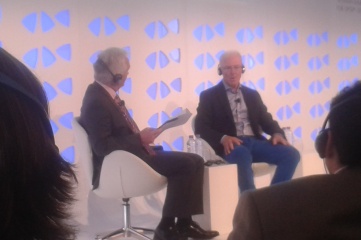 Former Ex Co member Franz Beckenbauer says winning Germany’s World Cup bid was his greatest achievement, and that FIFA should publish its ethics committee report into alleged corruption to show there is nothing to hide

Speaking at Securing Sport 2014 in London on Tuesday, Franz Beckenbauer told a select group of the press including HOST CITY that FIFA should make the findings of its investigations into alleged corruption public.

Beckenbauer was on the FIFA Executive Committee during the controversial bidding procedure for the 2018 and 2022 World Cups. Asked to reveal who he voted for, he said he had to respect the rules of the secret ballot. He also categorically stated that he did not accept, or receive any offers of, lavish gifts in attempts to influence votes.

But he did say “I was surprised that Qatar won. It was a good bid like all the others, but it’s not possible to play football there in the summer. You have to put a lot of effort into cooling the stadiums. My suggestion would be to host in the winter.”

In June 2014 Beckenbauer was suspended by FIFA from all football related activities for failing to help with the investigations of FIFA’s ethics prosecutor Michael Garcia.

Beckenbauer then agreed to take part in the investigation and the ban was lifted.

He told Securing Sport that he did not initially complete Garcia’s questionnaire because it was in complex legal English and he would have preferred to have answered such questions in German.

FIFA has indicated that the ethics report, which should now be in its final stages, will not be made public. But Beckenbauer said the report should be made public as soon as it is finished.

“Rumours are going round and that is very negative,” he said. “If the recent report has been finalised, it should be published. It’s up to FIFA – there is an Executive Committee to make these decisions, but personally, there is nothing to hide.”

Winning bid was my best achievement

Beckenbauer told delegates at Securing Sport that winning the bid to host the 2006 World Cup exceeded all of his many sporting and professional achievements.

Franz Beckenbauer led his national team to world cup victory as captain in 1974 and as manager in 1990. Yet asked by moderator David Walsh of the Sunday Times to name his greatest achievement, Beckenbauer said “Winning the bid for 2006 was the greatest moment of my sporting career.”

The greatest effect of winning the bid was the effect it had on sport in the country, he said. “German football has never been better than now; that is down to the World Cup. We have great infrastructure and full capacities.

“The way football has developed is fantastic. I feel sorry for other sports: you switch on the television and all you see is football.”

Beckenbauer told delegates in London that hosting the World Cup could have a similar positive effect in England. “It is surprising that England hasn’t won the World Cup since 1966. There is so much talent, such great stadiums and fans, financially there is no problem.

“If England won a bid to host a World Cup, perhaps that might be an incentive for improving the standard of football.”

To find out more about bidding procedures for major events, register for HOST CITY Bid to Win on 28th October