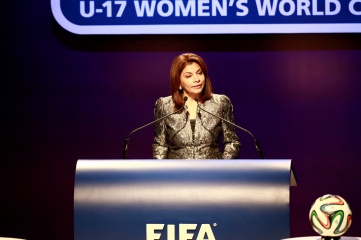 With women’s football growing in popularity in recent years, FIFA will be particularly hopeful of a large number of members applying to host the Women’s events. “The development of football for girls and women remains one of FIFA’s top priorities,” it said in a statement on Thursday.

“The FIFA Women’s World Cup has grown significantly in stature and significance over the last few editions. Now with 24 teams, it enjoys the second-biggest profile of all FIFA’s flagship events,” FIFA said.

“The FIFA U-20 Women’s World Cup is the second most important women’s FIFA event. The so-called ‘springboard for the stars’ tournament serves as a staging post towards the FIFA Women’s World Cup, not only for players but also for the hosts.”

The Women’s World Cup 2010 in Germany holds the attendance record of 395,295 spectators, achieving an average global in-home audience per live match of 2.8 million.

The bidding timeline for these women’s competitions requires the member associations that wish to host these events to submit a declaration of interest by 15 April 2014. The deadline for delivery of the hosting agreement together with all the signed bidding documents is 31 October 2014, with the final decision on the hosts currently scheduled to take place at the first FIFA Executive Committee meeting in 2015.

After successful editions of the Club World Cup in the United Arab Emirates, Japan and Morocco – which will also host the 2014 edition– FIFA has also opened the bidding processes for the 2015-2016 and 2017-2018 editions. Two host nations will host the events for two years.

Member associations that are interested in hosting the event are invited to submit a declaration of interest by 30 March 2014. The complete set of bidding documents has to be provided by 25 August 2014 and the Executive Committee will select the host in September 2014.

2017 will mark the ninth edition of the biennial Beach Soccer World Cup. Sixteen teams will participate in the ten to 12 day final competition, which requires just one stadium. “The location of the venue should reflect the sun, sea and sand of the Copacabana beach, the birthplace of beach soccer,” said FIFA.

Member associations should declare their interest in the Beach Soccer World Cup by 15 April 2014 and submit their definitive bids, including all signed bidding and hosting documents, by 1 October 2014. The host will be appointed by the Executive Committee at its meeting in December 2014.