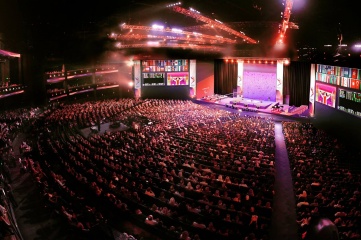 Rendering of Para Powerlifting in the Microsoft Theater (Photo: LA 2024)

The IOC and the bid committees of Los Angeles and Paris have agreed to work together on what the IOC President and LA Mayor have both described as the “golden opportunity” of awarding 2024 and 2028 Games simultaneously.

However, there is no guarantee of securing a host for 2028 before the next IOC session in Lima in September.

Speaking from the Extraordinary IOC Session in Lausanne, former IOC Vice President Sir Craig Reedie told Host City: “The IOC, having had issues with a shortage of candidates for previous Winter Games, now find themselves in a situation of having two outstanding candidates for the Summer Games of 2024.

“The Session decided that it would allow the creation of a tripartite solution involving the IOC and both of the cities, LA and Paris, to see if an agreement could be reached whereby one would agree to organise 2024 and a different city to organise 2028.

“This tripartite agreement is likely to take some time. If not successful, there will be a contest in Lima to award the 2024 Games. This solution was unanimously accepted by the IOC Session.”

The LA2024 bid committee welcomed the IOC decision with this statement: “This is a proud day for Los Angeles and the Olympic and Paralympic Movements in America.

“We're thrilled with the IOC's decision today, which is a major step forward in making LA's Olympic dream a reality.

“Today, two of the world's greatest cities, with outstanding but different proposals, stand ready to serve and advance the Olympic and Paralympic movements and their values. We look forward to working with the IOC and Paris in the weeks ahead to turn this golden opportunity into a golden future together.”

Paris mayor Anne Hildago tweeted: “#Lausanne marks the beginning of a great story between Olympic family, #Paris and #LosAngeles. Thanks to the members of the IOC.”

IOC member and co-president of Paris 2024 bid committee Tony Estanguet tweeted: “Today is day one of a new chapter. Three partners working together to strengthen Olympism.”

But not everyone is convinced that the IOC’s move is a result of positive factors. One delegate at Major Events International Summit on the Olympic park on Wednesday told Host City: “This is not a sign of strength but of weakness. They only have two candidates.”

In a wide-ranging interview to be published in the next issue of Host City magazine, Sir Craig Reedie gave an upbeat assessment of the bidding process for the 2026 Winter Olympic Games.

“Looking at the Winter Games that’s where there may be an indication of reason for hope. There is a potential bid from Stockholm, which is hopeful because if ever a country deserved a Winter Olympic Games it’s Sweden. They are a leading Winter sports country that have never hosted the Games.

"There is a good candidate in Switzerland from Sion and potential Innsbruck from Austria. Calgary are looking at it again, so perhaps we are moving out of the phase that the IOC had where, particularly in Europe, politicians seemed to be very loath to take on the major multisport Olympic events on the basis of their inability to control costs.”

Sir Craig Reedie is speaking at Host City 2017 in Glasgow on 28 and 29 November.