Home
»
News
»
Exclusive: Can La La Land win the biggest prize of all – the 2024 Olympic Games? 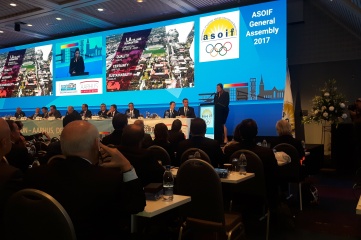 The vote to decide the 2024 Olympic Games host city takes place in September. Host City spoke with the leaders of Los Angeles' bid at SportAccord Convention

After the film La La Land won six Oscars, seven Golden Globes and five BAFTAs you would have thought that Los Angeles is getting bored in 2017 celebrating the success of its city and famous residents.

Don’t believe that for one Hollywood minute. That’s because the US city is still in the running for perhaps the year’s biggest prize of all – the hosting rights to the 2024 Olympic Games.

The race to host the 2024 Games is down to two candidate cities and in September the International Olympic Committee (IOC) session in Lima, Peru, will decide whether it’s LA or Paris that gets the nomination.

With the 130th IOC session fast approaching, the LA and Paris bid committees have been busy putting together the final touches of their showreel in order to garner votes for the 2024 election.

One major showcase for both bids was the 2017 SportAccord Convention (SAC) in Aarhus, Denmark in April.

The French capital put forward its bid of being ‘the right city, with the right vision at the right moment’. It also promised international federations and the Olympic movement that it would host the “most spectacular Games ever”.

The Paris presentation revealed that 95% of venues were already existing or temporary and the city’s ultra-compact plan would ensure that 85% of venues will be within 30 minutes of the athletes’ village.

Strong stuff from the “City of Light”, which is hoping to mark 100 years since it last hosted the Olympics in 1924.

And during LA’s 15 minutes in the spotlight at SAC, Los Angeles mayor Eric Garcetti told delegates: “It’s important we draw a distinction in our vision, because although many believe the two bids in this race are quite similar… they are, in fact, very different.”

With the heart of the film industry within its boundaries, it comes as no surprise that the Californians presented a strong narrative. When Host City asked LA 2024 Candidature Committee chairman Casey Wasserman if the entertainment industry could be drawn on for a potential LA 2024 Games, he replied: “We are very proud of our storytelling community, that’s what Hollywood is all about. When people want to speak to the world they come to LA. We think our ability of leverage that and bring that to the Olympic Games will be tremendous.”

While LA will bring some razzmatazz to the Olympic Games, the city’s bid has another very big USP regarding the bid’s funding.

“That’s very different from a government-financed project where you are sort of at the whim of the government. We’ve made that one of our key focal points as a bid is to have the lowest-risk approach with the most sound budget.”

LA will require federal support for security matters, but the operations and management overlay is financed through the individual projects. “That’s a distinguishing factor between the two bids and we wanted to highlight that because we do things differently in regards to hosting events,” added Ruggiero.

“We don’t have sports ministers for example. The way that we promote sport is through the private sector. Budgets can’t be slashed, therefore it’s a different kind of model.”

For venues, LA has adopted a low-risk approach of utlising the city’s extensive existing sports assets. This tactic has helped grow public support in the Olympic bid to 88%.

One asset, for example, is the LA Memorial Coliseum, which is planned to host the medal ceremonies and track-and-field events in 2024. On May 3 it was announced that the University of Southern California had secured approval from the Coliseum Commission to proceed with its $270 million privately funded upgrade of the LA Memorial Coliseum.

The elephant in the room at SAC

With two very strong and well-supported bids, one major city is going to miss out when the IOC makes its big decision in September. Or will it?

The IOC Session in Lima could in fact name the host city for both 2024 and 2028 – meaning both Paris and LA win the right to host a summer games. A working group composed of the IOC’s four vice presidents is currently evaluating this possibility.

Juan Antonio Samaranch, IOC vice-president, told a select group of journalists at SAC: “Basically what we are doing is not talking about 2024, internally we are thinking of how we can be more flexible to have a selection system that better suits our interests and the interests of the Olympic movement. The ideas that we might have for 2024 and 2028 are serious ones, but there is a process and both cities know what the process is.”

Paris’ committee has said it only wants to host in 2024 while LA chairman Wasserman was also straight with his answer. He told Host City: “We are bidding for 2024. There should be no confusion about that. I applaud the IOC for their thinking because it’s strategic and timely, but it’s also hypothetical. We’re bidding for 2024. Hypotheticals are not interesting.”

Next on the agenda for the IOC and the LA and Paris committees is the 2024 candidate briefing for IOC members and Summer Olympic IFs in July.

Once that’s complete it will be back to the drawing board for both cities to put the finishing touches to their candidature bids.

Will LA’s bid script see that big Hollywood ending? We will wait and see in September.