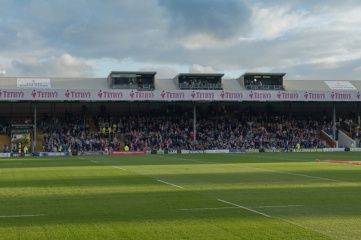 As well as hosting the 31-game Men’s tournament, England will host the Women’s and Wheelchair tournament.

“The news today that England has won the right to host the Rugby League World Cup in 2021 is transformative for our sport,” said Brian Barwick, Chairman of the Rugby Football League in England.

“Our commitment to grow the game internationally, attract more spectators than ever before and put on the biggest and best event in the sports history has clearly been recognised by the RLIF.

“With a sold out game between England and New Zealand this weekend in the Ladbrokes Four Nations it is clear that there is a real passion for international Rugby League in this country. The UK has a proud reputation for delivering world class sporting events and the Rugby League World Cup in 2021 will round off an incredible decade of major events in our country that began with the London Olympics in 2012. The hard work starts now, but we are confident that we can deliver.

“Finally, we would like to thank the government for their steadfast support for the bid. Their pledge to help financially support the staging of this event and their commitment to provide up to an additional £10m investment in infrastructure for the sport of Rugby League, has undoubtedly helped to bring yet another iconic world class sporting event to this country.”

The tournament will benefit from central government backing.

"I am delighted that England has been chosen to stage the Rugby League World Cup in 2021, said Minister for Sport, Tracey Crouch.

“The government is investing up to £15 million to put on a world class show and up to a further £10 million into the game's infrastructure as part of the Northern Powerhouse agenda – and to help Rugby League grow outside its traditional home.

“The tournament will be a fantastic festival of rugby, enjoyed by a million spectators, and bringing economic benefits to host towns and cities. I look forward to working alongside the RLIF, RFL and UK Sport on an outstanding event."

The bid was supported by The Sports Consultancy, who worked closely with the RFL and UK Sport from concept design through to development of the bid book.

“We are very grateful to The Sports Consultancy for their outstanding contribution in helping us to develop a high quality bid book that told a compelling story and ultimately won the RFL the rights,” said Jon Dutton, England 2021 Bid Lead.

“We believe it will be a transformative tournament for the sport both domestically and globally.

The 2021 Rugby League World Cup will be the biggest edition since 2000, with 16 teams and 31 matches and plans to stage 80% of games in Lancashire and Yorkshire with "showpiece fixtures" proposed for London, the Midlands and the north east of the country.

“Firstly congratulations to the team at the RFL who have worked tirelessly to bring this flagship event to England and we are hugely proud to have played a pivotal role,” said Robert Datnow, Joint Managing Director, The Sports Consultancy.

“I would also like to offer congratulations to our bid consulting team for their part in another winning bid and who from initial workshop through to bid book submission have demonstrated their professional, passionate and collaborative approach.”