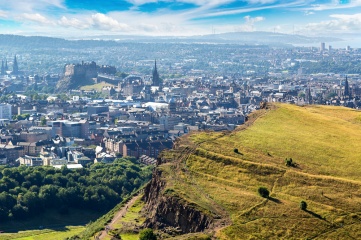 The event will showcase Edinburgh’s dramatic and historic cityscape

[Source: EventScotland] The Sprint World Orienteering Championships 2022 are coming to Scotland after Edinburgh was awarded the event by the International Orienteering Federation (IOF), beating Paris for the honour.

The IOF Sprint World Orienteering Championships brings together the best teams from around the world to compete across three main disciplines – individual sprint, sprint relay and knock-out sprint.  An anticipated 250 athletes from 50 countries are expected to attend the Championships, bringing with them additional coaching staff and supporters. In addition to the main Championship races, there will also be a full programme of spectator races suitable for all levels of orienteering ability and competitive classes for all ages.

Scotland has a strong history of hosting the World Orienteering Championships having previously hosted the event three times over the last 40 years. However, unlike the previous occasions when the event took place in countryside of the Scottish Highlands, the 2022 event will use the fabric of Edinburgh’s city centre to create an exciting and unique sports arena.

Taking advantage of the medieval tenements, the narrow and intricate alleys and the sweeping landscapes surrounding the city, innovation will be at the core of the Championships to challenge the athletes as well as bring the best possible experience of this thrilling and fast-paced sport to spectators by creating an amazing spectacle for them in the heart of the city. Use of innovative broadcasting techniques, including drone footage, will also allow organisers to showcase Edinburgh to an international TV audience alongside the exciting sporting action.

“Scotland has extensive experience in organising high-level events. The World Orienteering Championships in Inverness in 2015 was the latest major IOF event held in the country. The bid was partly initiated by EventScotland, which is involved in delivering major sporting and cultural events in Scotland.

“The support being provided by the City of Edinburgh Council and EventScotland was a key factor in awarding Sprint WOC 2022. We look forward to showing orienteering and Edinburgh to the world.”

He added: “Through their bid, we expect that Edinburgh will first and foremost provide exciting competitions where the world’s best sprint orienteers will be awarded their medals. But we also expect to increase the visibility of orienteering both locally and globally against the palette of the iconic landmarks of Edinburgh.”

Peter Hart, British Orienteering Chief Executive, said: “Being awarded the Sprint World Orienteering Championships 2022 is incredibly important to us. We have been working alongside our partners preparing our bid for a long time and I’d like to thank them all for their dedication to it, in particular, the Scottish Orienteering Association, for driving this exciting project forward.

“This win gives us the opportunity to further develop the sport throughout the United Kingdom by building on the success of 2015 when we last hosted a World Championships.

“We look forward to welcoming the world’s best orienteers with a warm Scottish welcome to Edinburgh in 2022 where they will battle it out in what is guaranteed to be a thrilling competition in a spectacular city.”

Paul Bush OBE, VisitScotland’s Director of Events, said: “We are delighted Scotland has been awarded the right to host the Sprint World Orienteering Championships 2022. This is an excellent result following the hard work by the bid partners to secure this important international event for the Scottish capital.

“Over the years, Scotland has developed the capacity and capability to deliver a wide range of sporting and cultural events, and it is our globally recognised reputation along with our experience in event delivery that makes Scotland the perfect stage for events.”

“Images of the competitors making their way down the Royal Mile will present an excellent opportunity for us to showcase Edinburgh’s beautiful and historic cityscape to a global audience.

“We’re looking forward to hosting this Sprint World Championship sporting event, and I’m sure the people of Edinburgh will warmly welcome the many competitors and supporters from all over the world.”

“Building on the experience of our successful hosting of the 2015 World Championships, we are confident that this event will promote growth in our sport locally and across the country.

“We look forward to working with our partners in the event and to welcoming the world's best orienteers to Scotland again.”

The decision to award Edinburgh the Sprint World Orienteering Championships 2022 follows the city being shortlisted by the IOF earlier this year and a visit by officials in May to see the city’s world-class venues and facilities that will make it the perfect host.

The IOF will now appoint a Senior Event Advisor to work closely with the Steering Group and Organisation Committee to oversee the delivery of the event including reviewing and agreeing race venues, TV rights and appointment of officials.