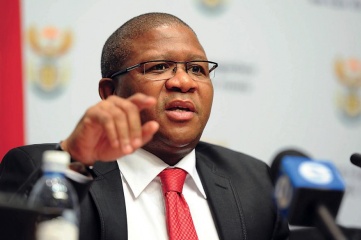 Minister of sport Fikile Mbalula called on the CGF to award the 2022 Games to Durban. (Photo: SASCOC)

The two cities left in the bidding for the 2022 Commonwealth Games have faced off with short presentations at the Commonwealth Games Federation General Assembly currently being held in Glasgow ahead of the Games which start on Thursday.

The South African city of Durban and the Canadian city of Edmonton are the only two cities in contention for the 2022 edition of the Games after a series of cancelled bids.

The president of the South African Sports Confederation and Olympic Committee (SASCOC) Gideon Sam presented the bid alongside chief executive Tubby Reddy, the head of sport for the City of Durban Vuzi Mazibuko and South Africa’s minister of sport Fikile Mbalula.

A video was screened alongside the presentation and referenced the late Nelson Mandela and his beliefs about the power of sport. It ended by saying: “It’s Africa’s turn to host its sons and daughters for the first time on home soil… in the city where Nelson Mandela chose to cast his first vote. Let Durban be the first African city to host the Commonwealth Games,”

Minister Mbalula vowed his support for the bid and guaranteed the country’s commitment to the Games and called upon the federation to award Africa its first ever Commonwealth Games. “We guarantee the government will play its part in hosting the most successful sporting events in South Africa,” said Mbalula. “The Commonwealth Games to us are important Games in terms of what we seek to achieve collectively over the years. It’s our turn as the African continent.”

Meanwhile, Edmonton’s bid was introduced by Commonwealth Games Canada president Andrew Pipe before chairman of the 2022 bid, Reg Milley, made the presentation. Milley focused his address around learning from the upcoming Games in Glasgow. “We’re in Glasgow to listen. We’re here to learn,” said Milley.

Durban’s bid presentation has already been highly praised by sections of the South African media but the final vote will not be cast until September 2015 when the Commonwealth Games Federation meets in Auckland, New Zealand.