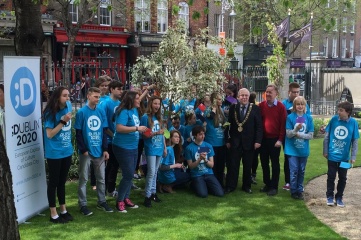 The Lord Mayor and 28 students from all of the 28 EU Countries at Dublin's Mansion House (Photo: Dublin2020)

Dublin steps up to compete with Galway and Limerick to host European Capital of Culture in 2020, a title to be shared with a Croatian - and possibly Serbian - city

The race to host the European Capital of Culture 2020 shifted up a gear on Saturday, when Dublin announced its bid and Galway revealed a new website for its bid. Limerick, which was City of Culture in 2014, is also in contention.

There are two European Capitals of Culture every year. The bid process starts when the European Commission calls for applications from the relevant national authorities, such as the ministry of culture.

Ireland and Croatia, which joined the EU in 2013, have been designated the hosts of the 2020 edition and the process is underway to select a host city from each of these countries.

Christy Burke, Lord Mayor of Dublin on Saturday welcomed 28 young Dubliners to present their hopes for Dublin2020 in a “wishing tree ceremony”.

“I am thrilled to join these young visionaries on Europe Day and to officially launch Dublin2020, our bid to be European Capital of Culture in 2020,” he said

“Dubliners are proud Europeans and these young people, who will all be young adults in 2020, are the city’s future.”

The cities will now prepare candidature files that will be judged on six criteria: contribution to the long-term cultural strategy; European dimension; cultural and artistic content; capacity to deliver; outreach; and management.

The title is awarded on the basis of a specific programme over and above the normal cultural activity of a city.

According to the European Commission, the size of a city is not a factor and surrounding areas may be incorporated into bids. Cities with fewer than 25,000 inhabitants have hosted the European Capital of Culture.

The European Commission says success factors are: acting as a catalyst for a step-change in the city, or an area of a city; a measurable increase in the self-esteem of citizens and pride in the city; an increased engagement with the cultural offers of the city, especially with audiences less likely to attend or participate; development of new cultural offers, new skills, new opportunities for artists and cultural organisations; and a greater international understanding and profile, often seen in increased tourism and reputation.

The host cities of the European Capital of Culture 2020 will be announced next year.