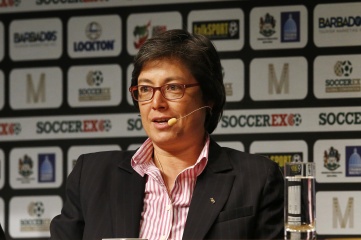 And in the wake of Sepp Blatter’s confirmation that he will stand for a fifth term as FIFA president, more executive committee members have publicly backed suggestions that limits should be imposed on terms of office.

Asked by HOST CITY at Soccerex Global Convention whether increasing the number of people with the right to vote would improve perceptions of FIFA, Dodd said “The more important measure would be to make voting open.

“If people are answerable for how they voted, it’s visible, it’s clear who they supported, then there’s no suggestion that there are multiple promises for a single vote. I think it would do a lot to rid the process of those sort of suspicions, if it was open voting.”

FIFA’s 27 executive committee members currently have the right to vote on the issues that govern world football. Just 22 people were eligible to cast votes for the 2018 and 2022 FIFA World Cups, as compared to the 94 IOC members that elected the host city of the 2020 Olympic Games.

Another concern is that football’s world leaders are able to govern for an indefinite length of time. On Monday, FIFA’s 78-year old president Sepp Blatter confirmed in a video presentation to Soccerex Global Convention that he would stand for a historic fifth term.

On the same day, FIFA Vice President Prince Ali Bin Al-Hussein told the press that he supports time limits on terms of office – while stressing that Blatter has every right to stand again under the current rules.

“The process of reform within FIFA needs to continue and eventually we should look at instigating term limits and maybe not just for the FIFA president but also for executive committee members as well, including myself,” Prince Ali said.

Speaking at Soccerex on Tuesday, Moya Dodd, who is vice president of the Asian Football Confederation as well as a FIFA ExCo member, said “In Asia we have a limit on age and terms. I think term limits are healthy. Age limits are discriminatory and not the best way to ensure turnover anyway.”

Jim Boyce, who at 70 is eight years younger than Sepp Blatter, said “I am in favour of an age limit and a time limit. I honestly feel that if someone has three terms – that’s 12 years – or an age of 75, then they have made a good contribution and it’s time for someone else to contribute.”

As well as the issues of age and tenure, FIFA is tackling a gender imbalance – a drive that began with Dodd’s appointment last year.

“It’s inevitable that more women become involved in the game and will be a strong part of the management of sporting enterprises,” said Dodd.

Uefa president Michel Platini has decided not to stand against Sepp Blatter and it is not clear who might challenge Sepp Blatter to the presidency. Michele D’Hooghe, FIFA ExCo Member, told delegates at Soccerex “Michel Platini gave a very positive message to the last meeting of the presidential general secretaries of FIFA in Monaco at end of August. He didn’t say ‘I don’t go for FIFA’; he said ‘I choose for UEFA’."

To find out more about potential changes to bidding procedures for major events including the FIFA World Cup, register for HOST CITY: BID TO WIN, which takes place in London on 28th October 2014